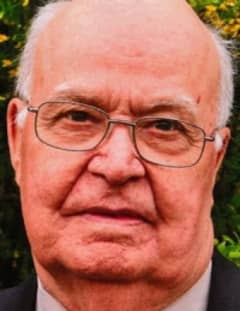 After leaving school Ted worked a few jobs before settling in to become a fixture at Windsor Ford where he worked for 47 years. Retirement at the age of 65 allowed him the opportunity to putter around his yard, spend time with friends and family, and regale anyone who would listen with stories of the community and the people of Valhalla Centre. He was proud of both his Norwegian heritage and being from Valhalla Centre. He was a Charter (and 50-year) member of the Sons of Norway and a member of the Oldtimers Association.

The family would like to thank the staff and residents of Lakeview Seniors Home for their kindness, Dr. Pope for his friendship and medical care and the many nurses for the compassion they showed Ted and the family while in their care.

The funeral for Ted will take place at 1 pm on Friday, January 24, 2020, at Trinity Lutheran Church in Grande Prairie (10407 100 Street). Interment to follow at the Valhalla Cemetery.
Memorial donations may be given to the Valhalla Heritage Society, Box 52 Valhalla Centre, T0H 3M0

I got to know Ted when I worked at Loveseth's in Grande Prairie (1974-76) and then better when I worked at Village Ford in Berwyn (1976-86). Ted was always willing to help and I learned a great deal from him. My sincere condolences to his family and many friends.
- Neil Thomlinson
My thoughts and prayers are with the family. Sorry for your loss.
- Terri Gould
MY CONDOLENCE TO TEDs FAMILY, KNEW TED ALL MY LIFE AND STAYED IN TOUCH HE WAS A GREAT MAN. WE SHARED THE SAME AUNT THAT LIVED TO BE 104 YEARS OLD . 47 YEARS ON ONE JOB QUITE A GREAT FEAT LARRY JOHNSON
- LARRY JOHNSON
So sorry Christine and family for the loss of Teddy! I was very fortunate to work by his side the last few years before his retirement; he trained me well! He was always there when I needed a shoulder or to share a great joke! We had so many laughs together! The last few years I totally lost touch with you & Ted. May the memories you share get you through. You have a solid family & so many friends for support. Always adored and remembered. Debbie Steeves
- Debbie Steeves