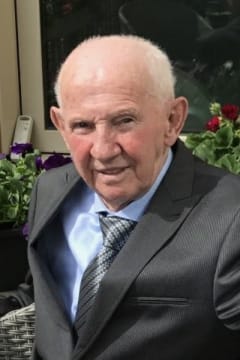 Obituary For Alexander A. Cameron

It is with sad hearts that we announce the passing of Alexander A. Cameron, resident of Grande Prairie, formally of Flying Shot Lake Area, on Thursday January 21, 2021 at the age of 90 years.

Alex was born in Grande Prairie on February 15, 1930 to Alex Sr. and Margaret Cameron. He attended school in the Flying Shot Area and then High School in Grande Prairie. Alex met Jean Scorgie during these high school years, and they were married on Oct 25, 1954. They had been married over 64 years when Jean passed in 2019.

Alex started his career in what became his favorite place in the world, “in the bush”, felling trees and at the planer mill in Dimsdale. He went on to be a talented finishing carpenter and worked with J.B. Tissington Construction for 18 years. Alex then moved to his folk’s farm where he farmed and resided until he moved into Prairie Lake Seniors Community in 2018.

Alex was predeceased by his spouse Ramona Jean Cameron, his son Curtis, Camille Chateauneuf, his sister Mary, his brother Ted, and his parents Alex and Margaret Cameron.

Alex will be laid to rest at a private family interment Family Plans are to have a Celebration of Life when we are able to meet again. 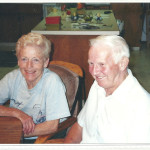 We have never forgotten the visit we had with Alex and Jean almost 20 years ago. It was such an enjoyable time sitting around the table that evening learning about family. Peter n Wanda Shearer, New Brunswick
- Peter n Wanda Shearer
My condolances to Dianne and Shelly.
- Debra Bushaw ( Chalmers)

Sending positive thoughts and prayers to Alex family and friends.His sparkling eyes and sweet smile would light up a room..He displayed such strength and courage no matter what the challenge.A kind and generous soul. We are blessed to have known him and dear Jean for most of our lives.A true gentleman.Rest Easy Alex. Kindest Regards,Sharon,Richard Annis and families,Lisa,Derek Hall,Erin ,Kevin Eady, NicholeAnnis. Alex had
- Sharon Annis

I want to send sincere condolences to the Cameron family. Alex was such a sweet gentle soul, I enjoyed his company on many family gatherings. He loved a good visit and history was also a great passion. Rest In Peace Alex , you will be missed.
- Joanne Ingalls
Although I didn't know him very well personally, my dad, Stan Mitchell worked for him at Tissington Construction and he spoke very highly of Alec. And they lived across 110 Avenue from him for awhile. May he rest in peace.
- Cliff Mitchell

To the Cameron Family We are so sorry to hear of Alex's passing. He will be greatly missed by all who knew him. We know all the fond memories will help to ease the pain overtime. We are thinking of you all. Danny & Janice Dorscheid
- Danny Dorscheid
So many memories of a wonderful man! His smile, his laugh and his gentle ways. A true loving and devoted Gentleman! 💐🙏
- Sherry Holyk

I am sorry for your loss may he Rest In Peace.
- Gloria Jackson

Sure going to be missed by many, Almost made it to 91! It is never a good time to say goodbye to someone you love. I hope it brings some comfort to know that goodbye isn't forever, and one day you will meet again,. I am going to miss his presence and spunk.
- Muriel Almond

I was so sorry to learn of Alex's passing. He was always friendly and always with a smile. Alf and I always enjoyed our visits with him and your mother. My sincere sympathy to all your family.
- Gwen Richards
Condolences to the whole family. I remember Alex fondly as a customer at ATB, meeting him back in the 70s. A wonderful, charming and fun man. RIP Holly Conrad Guay
- Holly Guay