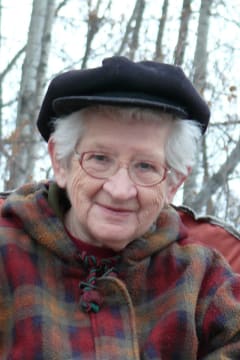 Anna Ladwig, (nee Bartsch), a longtime resident of the County of Grande Prairie, passed away on November 20, 2021, at the age of 81, in the QEII Hospital.

Anna was born in Hague, Saskatchewan, the fifth of 6 children. The family moved to Lymburn, Alberta in 1948, when Anna was just 8 years old, travelling by passenger train with all their possessions.

The local school only went up to grade 9 or 10. Anna was determined to graduate, so she finished her high school in Hythe, graduating in 1959. The following year Anna went on to spend 2 years at Peace River Bible Institute. She loved music and sang often with other students in the small CFGP radio station on Sundays, crammed in the tiny studio to offer live church music.

Anna met her husband Arnold Ladwig at a bush camp far from civilization, where he was working as a Millwright. Anna’s aunt was a cook there, and Anna played accordion for Arnold as he ate. A cousin of Anna’s found ways to encourage their contact!

Anna married Arnold in 1965. They had three sons (Mark, Allan and Corrie), raising them on their farm east of Grande Prairie.

They were heartily involved in the formation of Bezanson Community Church, which opened its doors in 1971.

Anna was known to be determined and fiercely independent. She worked hard at whatever she set her mind to, job or hobby. An avid bookworm, Anna sold World Book Encyclopedias for many years, sharing her love of the written word with many. She was strong, loving and generous, known to take in strays, and visit those who felt abandoned or lonely.

Anna was also a historian at heart. She researched and wrote, read more, and made scrapbooks, documenting many family histories. She was a storyteller. A true Mennonite, she took 2 minutes to get acquainted, and 10 minutes to get related.

Anna’s love of music continued throughout her life. Her whole being would light up when she would sing or play music on her many instruments. She was a member of the German Canadian Choir for many years. She was also in a group that routinely went around to many senior homes in the area to share music.

Anna had dreams of becoming a teacher, and when God blessed her with the opportunity to homeschool her granddaughter, she embraced it. She was an excellent teacher! One would not dare to ask her a question, for she would pull out the encyclopedias and get you looking everything up!

Anna is predeceased by her parents George and Aganetha Bartsch, her brother John, and brother-in-law Henry Lowen.

Funeral for Anna Ladwig will be planned for the spring.