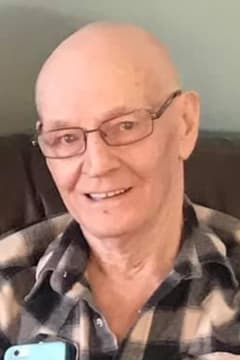 It is with heavy hearts that we announce the passing of Arthur Raymond Vongrad on May 13, 2022, at Grande Prairie Regional Hospital, after complications arising from COVID-19. He was 76 years old.

Arthur was welcomed into the world as the fifth child of Alexander and Freida von Grat on September 17, 1945. His childhood was typical for those growing up on the farm during that time, with perhaps the most unique experience being operating a Cat to clear brush for farmland at age 7.
Arthur’s formative years were influenced by Elvis Presley, fast cars, and socializing with friends over a few beers. He didn’t play many games, but he did enjoy playing cribbage in his later years.
Arthur married Diana Louise Grassl on March 15, 1969, raising 4 children—David, Lisa (Troy), Kimberly, and Arthur Jr. over the next 22 years. He provided for his family working as a drywaller in Edmonton and the Northwest Territories, farming in Goodsoil, SK and Whitewood, SK, and operating a successful leather and repair shop in Whitewood. When he wasn’t working, Arthur enjoyed spending quality time with his family at the cabin, boating, and fishing. He took up golfing while working in the oil & gas industry.
Following a divorce in May 1991, Arthur moved to northern Saskatchewan and Alberta where he worked briefly for the RCMP. Many of these years were spent as a gas well operator for various energy companies in the region.
Heart complications dictated that his career was nearing its end in 2010. He moved to Grande Prairie where he lived for a time with his daughter before moving into Heritage Lodge seniors’ residence in 2013. It was there that he spent his remaining years.
Arthur is survived by his older brother Alfred, three children, eight grandchildren: Chase, Dawson (Chad), Ryker (Jason), Sierra, Shane (Karen), Dion, Christian, Samantha (Shaun), three great-grandchildren and numerous nieces and nephews.
He is predeceased by his parents, five siblings (Jerry, Bill, Margaret, Eileen, and Ervin), and youngest son.
Arthur was cremated at Bear Creek Funeral Home in Grande Prairie on May 18, 2022. The burial service will be held at the Flat Valley Cemetery on August 27, 2022.