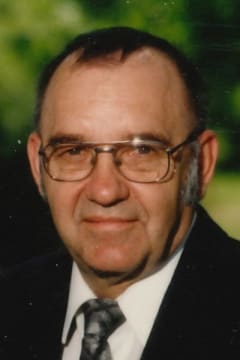 Bernell (Bernie) Schierman passed away peacefully on October 19, 2020 at the Grande Prairie Care Center at the age of 82 years.
Born on November 9, 1937 in Bashaw, Alberta to Cecil & Freda, he was one of six children.
The early years were spent working in the oil patch, chasing coyotes and cruising the streets.
On May 26, 1961 he married Marlene Sarah Radke. Married life found them living in Edmonton, Innisfail and Lacombe where they had 3 children: Darlene, Allen & Terry.
In 1969 they moved to Grande Prairie, Alberta so Bernie could manage Blue Flame Propane. They bought a home and resided there until selling it in 2017.
In his younger years Bernie enjoyed hunting and fishing. He spent time with Allen, relatives and friends sharing his love & knowledge of the sport. During the summer he & Marlene spent the weekends at the lake with his brother Ron & family. The winters were spent curling in Sexsmith and playing cards.
In 1977, Bernie and Marlene opened their business, BerMar Rewind Ltd, which they ran until 2003 when they sold it to Allen. Bernie did not enjoy retirement so he began driving for PTI Camp Services where he enjoyed driving many miles through the north country.
Later years were spent watching curling and hockey on tv. He was a supporter of Ducks Unlimited, Storm hockey, bingo and the casino. He retired fully in 2015 after Marlene fell ill and required help at home. Once Marlene passed away Bernie lost his spark and lived a quiet life.
Survived by: daughter Darlene (Terry) Haughian, son Allen (Wendy), daughter Terry. Grandchildren: Darcy Haughian, Courtney (Brent) Fulmek, Jancey (Ryan) Dolen and Kayla Haughian. Great grandchildren: Cara Paul, Carter & Kelby Dolen, Brooklyn & Kennedy Fulmek. Sisters: Rhoda (Bob), Ivy, Sylvia, Brother Ron (Elaine), many nieces & nephews, as well as extended family on Marlene’s side.
Bernie was predeceased by his wife Marlene, brother Ralph, parents Cecil & Freda, in laws Ernest & Addie Radke and other relatives.
Bernie’s wishes were for no service to he held. Cremation has taken place.
In lieu of flowers, donations may be made to Grande Prairie Care Center or a charity of one’s choice.
We wish to thank the staff at the Grande Prairie Care Center for the compassion and care given to our dad for the past 2 years.
Care entrusted to Bear Creek Funeral Home and Cremation Sanctuary 780-830-7742 www.bearcreekfuneral.com

My deepest sympathy to your whole family. I used to deliver freight to BerMar for a couple of years and always enjoyed both your mom & dads kindnrss, and wonderfull sense of humor. Their traditonal Monkey calenders brought many smiles. I know they will be deeply missed. Levola Sedore1
- Levola Sedore
On behalf of myself and my mother Verna Pendlebury we wish to extend our deepest condolences.
- Vernon Dufva
On behalf of my mom Verna Pendlebury and myself we extend our deepest condolences.
- Vernon Dufva
You are each in our thoughts and prayers .
- Pat & Karen Cox
Terry and family.....So sorry to hear of Bernies passing.....Thinking of you all at this most difficult time....Alot of good memories I will cherish.....
- Michelle Anthony
Thinking of you all. So many memories of all our family gatherings at grandma Schierman's (that was the best times) and our bingo and casino trips, when they would come and visit.
- Kelly budd