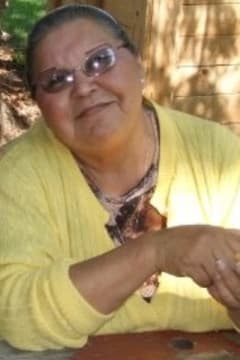 It is with great sadness; a mom, great grandmother, great great grandmother, a sister, and auntie to many; announce the passing of Beryl McAllister Tharp; at the Fairview Health Complex on August 16, 2020.
Beryl married Alvin and were married for 45 years. Early 70s became a resident of Hines Creek. Beryl did her schooling at Montagneuse Valley and Worsley Central High School. Beryl became a homemaker, a job she really enjoyed and loved. She loved being a mom to many nephews and nieces. Her door was always open to anyone, oh! and fridge door now you're home! Beryl and Alvin two peas in a pod, where one was, the other was. People can probably remember them parked somewhere just watching people.
Beryl leaves to mourn son Reg McAllister, daughter Marilyn Ferguson. Beryl was a mom, great grandma, great great grandma, to many nieces and nephews. Also leaves to mourn her brothers, Lennie, Bud, Wesley, and sister Evelyn. She will be missed. Beryl leaves a big hole in the family, also to her friends Darlene and Carl, bingo friend Alice.
Beryl was predeceased by her parents Charlie, and Flora, siblings Mary, Grace, Bertha, Verna, Josie, brothers Dougie and Lloyd, her husband Alvin Tharp 2019, son Edwin 2013, best friend to her and Alvin Uskai (Henry) 2019 , only auntie Bernice Granger.
A graveside service will be held for immediate family at the Hinterland Cemetery August 22nd, 2020. 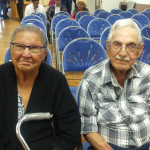 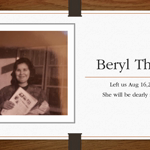 Our condolences to Morgan and all family. Beryl and Alvin were beautiful souls. May they rest in peace
- Kathy zavisha