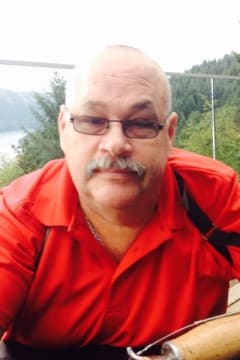 Brad died suddenly in the late afternoon of December 18, 2020. He was born in Edmonton on June 6, 1961 to William and Patricia Mulcahy (Hutchinson).

On October 2, 1999 he married the love of his life Trish (Red) and immediately jumped into fatherhood with Stacey, Shelley, Jody, and Heather. He quickly learned the joys and woes of living with teenage girls as Jody and Heather were young enough to be living at home. He loved it and loved all the girls.

Brad lived his younger years in Edmonton, Yellowknife and Fawcett and spent most of the next 30 years in Grande Prairie where he became the "go to" guy for his family and friends.
He spent his working years driving trucks and operating various types of heavy equipment. His love for trucks and his ability to use colorful language began when he was 18 months old and got a truck for Christmas. It lasted his lifetime.

One of the biggest challenges he faced was when he lost his left arm in a crusher accident at 18 years old. As he learned to live and deal with this, he put into practice one of his favorite sayings "Oh quit your sniveling, put your big girl panties on and deal with it." He met his own challenges admirably with fortitude and great determination.

Brad was predeceased by his dad Bill (2008), his grandparents, aunt Leone Tompkins, and uncles Garry Mulcahy, Bill Tompkins, and Keith and Doug Hutchinson.

Our Brad (Bunky) will be lovingly remembered by many people.
God Bless his soul and may he Rest in Peace.

There will be no funeral at this time. Hopefully, we can have a Celebration of Life in the spring.

No flowers please. If you so desire, you can honor Brad with a donation in his name to a charity of your choice.

Our sincere condolences Trish and family. Brad was a great guy to know and work with. He will be truly missed. Tom and Cindy Thibert
- Tom Thibert
My sincere condolences to Brads family, Trish, kids, mother Pat. I have many fond memories of Brad from the '80's and the CB radio group, and the bunny hunts we participated in. He was a good friend. He talked me into going out to Fawcett to pick up his Toyota one night and bring it back to Edmonton. It was the night before I wrote my final exam at NAIT. Piece of cake he said, be back by 9-10 at the latest. A wire kept falling off the alternator and the motor would stall. It was after 1 in the morning when I got home. I truly enjoyed his friendship. Our lives took us in different directions and I haven't had contact with Brad for about 10 years I always considered him a good friend and remember him fondly. I am so sorry to hear of his passing.
- Bill Kimball
So sorry to hear this news. Have great memories of Bradley at our acreage. All our love Trish
- Flesher’s
So sorry for your loss
- Fleshers