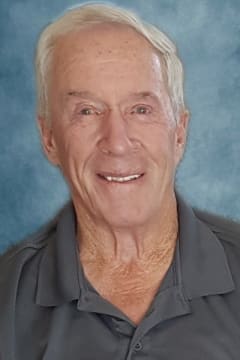 It is with heavy hearts we mournfully announce the passing of Bruce McCullough.

On Tuesday, February 25, 2020 Bruce McCullough passed away at his home in Grande Prairie at the age of 84. Bruce was born in Consort, Alberta, the 3rd born child of Hamilton and Ella McCullough.
His early employment consisted of threshing, combining and starting his first business venture in a 50/50 partnership doing custom combining. He supplemented his income with a position as a roughneck at the age of 16. In 1958 at the age of 22 he joined the Edmonton Police Service. In 1965 he went to work with the Inspection Service (Highway Traffic) Branch of the Provincial Government, working in Edmonton and surrounding area for 6 months followed by a 4-month stint at Peace River.

In 1966, the family moved to Grande Prairie. He continued working the government job and decided to add on a sideline of trucking by entering a 50/50 share of a logging truck. He then purchased Edgar & Cissell Trucking in the spring of 1974 and sold out in 1980. He rejoined the trucking business in 1983 where he remained until his retirement in 1995. He diversified his business ventures with a 5-year stint in the food kiosk business. After a decade of retirement, he spent a year working as a safety consultant.

Bruce spent many years dedicating his time to the Shriners organization, including holding the position of Potentate in 1997.

He was predeceased by his parents, his wife Perky, brother Robert, brothers in law Milton Holmes, and Cyril Fugard, sisters in law Shirley (Beaumont) and Leslie (Abele) and niece Judith Yaunish.

Bruce’s ashes will be interned next to his wife Perky at a private family gathering in the spring of 2020.

Sending positive thoughts and prayers to Patrick, Nolan and families,We are so Sorry to learn of your Dads Death. Kindest regards , lSharon and Richard Annis and families,Lisa ,Derek Hall, Erin,Kevin Eady ,Nichole Annis,Brent Ezzard, and families.
- na
Our hearts are with you at this very sad time. Donna and Ben Krzysik
- na
Dona and families So sorry to hear of Bruce's passing.. may you all have memories of your loved one that You will treasure forever Our prayers and thoughts are with you Carrie. And. Adrian. Richardson Wetaskiwin
- na