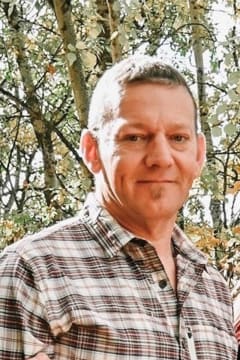 It is with heavy hearts we mournfully announce the passing of our son, father, spouse, brother, uncle, friend Chad Collicutt.

Chad was born to Angela and William Collicutt on August 28, 1976 in O’Leary, P.E.I. His little sister, Joanie was born a couple years later. He attended the French Immersion program at Bloomfield School in Westprince. Chad’s son Bailey was born in January 2000, he was his dad’s pride and joy.

Chad headed out west to work in Alberta and Saskatchewan between 2006 and 2016. He spent his time helping numerous people through hard times. P.E.I was always considered home for Chad, he loved to go back to see his family.

In April 2017 Chad moved to Spirit River to live with his Dad and Jess. He drove for Vertex as well as his dad for a few years before deciding to drive full time for his dad in February 2020. It was time they spent together doing what they both loved. In August 2019, Bailey came out to work with his dad and spend some quality time with him until Christmas that year.

In early fall of 2019 Chad met Sheri and her children, Matt and Marissa. He had finally found “his person”. These were very happy times for Chad and they had many future plans together.
Chad was a hero to many and there are no words to describe him.

On the evening of October 12th, 2022 God broke our hearts to prove he only takes the best.

Chad was predeceased by his half sister April Bulger, maternal and paternal grandparents, aunts and uncles.

On Saturday October 29th a memorial convoy and light up was held for Chad. Thank you to everyone that took the time to join us, our eyes were filled with tears and hearts were overwhelmed with love. A special thank you to the organizers that made this all come together, Jeremy Fleming, Jeff Jolly, Vertex, TNT staff, Transport tires, Curry towing and the drivers that participated.

There will be a Celebration of Life for Chad at the Bear Creek Funeral Home on November 2nd, 2022 at 1:00 pm.

In lieu of flowers donations can be made in Chad’s name to the Canadian Diabetes Association or the local Animal shelter.