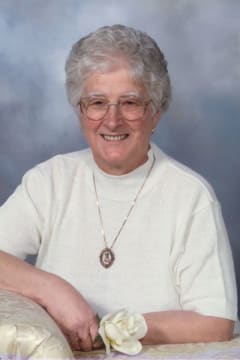 June was born on June 3rd, 1932 in Grimshaw Alberta to Alfred and Maria Eggli on their homestead farm in the first home her father built. To be clear, it never became a chicken coop. It became a grainery.
June walked 2 miles to school in Grimshaw, uphill both ways.
On June 28, 1957, June married Constable William Alexander Woods. They moved several times in their RCMP years, but after Bill retired from the RCMP, the family settled in Grande Prairie so June could be closer to her family, her mother Maria, her two sisters Margaret and Alfreda and their children.
June loved to crochet, listen to music and go camping. She grew house plants and scrapbooked. June loved to collect things especially chickens, plates, jars, chickens, sparkly jewelry, rocks, chickens, magnets, spoons, matchbooks, chickens, coins, coffee mugs, hotel soaps and chickens.
June was well travelled going many places including places as far as Europe and Australia.
June loved spending time with her grandchildren. She really loved Saturday mornings at Humpty’s with Brittney. If they went to Wal-Mart, even better.
June moved into Wild Rose Manor in 2018 where she was living until her passing. June enjoyed the lodge where she participated in many activities and made new friends.
June is survived by her sister Alfreda Wright, her 3 children David Woods (Krista), John Woods (Joyce), Maria Person (Kevin), and her four grandchildren Brittney Person, Elise Person (Scott), Avery Woods and Evan Woods.
June will be missed by all who knew and loved her.

“I have to go back now, they get me up early you know”

If desired, memorial donations may be made to:
Canadian Diabetes Association.

Hi Dave & Krista and family Sorry to hear of your mom,s passing I watched the service,it was beautiful God give you strength in the coming ,hugs to all of you
- Audrey Rose
Thinking of all the family in your time of sorrow. A big part of growing up was spending time together with the extended family. God bless you, Audrey
- Audrey Rose
Our sincere sympathy in your loss. Our thoughts and prayers are with you. Martin & Shari Wolfram
- Shari Wolfram