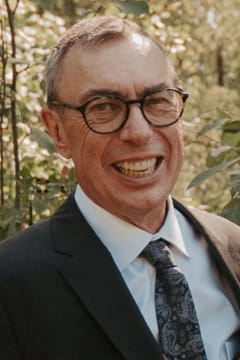 It is with great sadness and heavy hearts we announce the passing of our husband, father, grandfather, brother, uncle, and great uncle, Dale Alphonse Blimke, on January 19, 2023, at the Grande Prairie Regional Hospital, at the age of 67.

Dale was born April 4, 1955 to parents Bernard and Yvonne Blimke, and grew up on the Bayens family farm in the Five Mile District east of Grande Prairie. Dale graduated from St. Joseph High School, Grande Prairie, in 1973.

Dale’s career began in the spring of 1973 at the new Proctor & Gamble pulp mill. Dale started work there before he graduated from high school and was one of the early employees hired. He continued working at the mill through all the Company changes to Weyerhauser and International Paper as a Unit 3 operator, a ticketed Instrumentation Technician and finally the Mill Instrumentation Planner. He also took on the role of an EMT for the Mill site, which gave Dale great satisfaction. Dale retired in April of 2019 after 46 years of service.

In 1990, Dale married Marlene and together they raised 4 children on the family farm East of Grande Prairie, just 3 miles from where he grew up. Dale was a hard worker, loved travelling, gardening, farming and raising cattle, all of which he continued to do until recently. Dale was always willing to offer a helping hand to family and friends. His sense of humor and presence will be missed terribly.

Dale was predeceased by his father, Bernard in 2015, and mother Yvonne in 2020 as well as numerous aunts and uncles.

Memorial donations in Dale’s honor can be made to the Canadian Cancer Society.