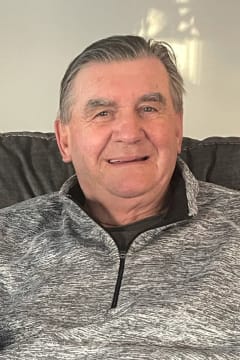 Danny was the second son of Godfrey and Doris Thomas who emigrated from England after the war. His mother, Doris, came to Canada as a war bride on the Queen Mary. The family farmed in Viking for a number of years, with the rigors of prairie life it was too much for Doris; Danny was 10 when the family suddenly moved back to England for a year. After a year in England, Doris and his brother Dave stayed in England while Godfrey and Danny moved back to Canada, settling in Fourth Creek, AB. Danny and his dad homesteaded in a small one-bedroom shack and worked for every meal they put on the table.

Those years shaped the rest of Danny’s life- his love of nature, dogs and moose hunting took shape.
Danny got his first job in the mid-sixties as a cat skinner working for his neighbor Jim Hindmarch. He worked throughout Alberta and northern BC in a variety of cat skinning jobs. Danny talked fondly of the 60’s and 70’s. There was a lot of work and the job paid well.

In the 80’s dad settled down with his partner Connie and raised four children. Danny worked many 350-hour months building roads and leases in the Peace Country. Raising children was a lot of sacrifice back then, including long hours on the job and not enough time at home; but that’s how it was. He had a great respect for the good men he worked for- it was a different time where you wore your heart on your sleeve for your boss and he treated you like gold. Danny appreciated that, and he shared many stories of Albert Campbell, Ed Norton and other hard-working men with great fondness.

Over a number of years, Danny accrued enough farm equipment to sow an 80-acre wheat crop; things went well until the combine broke down! Luckily his neighbors Herman Briese and Joe Sawchuk helped him combine the remaining acres, and he truly appreciated them. He lived his dream of doing what his father and he had accomplished decades earlier.

After the children moved out on their own way, Danny enjoyed many years of auctions, garage sales and good deals posted on the buy and sell bulletin boards. He loved to tinker on vehicles and always had one he was fixing. Over his lifetime, he hunted every year and loved nothing more than a good moose hunt in November- a little cool with fresh snow on the ground. He was an excellent hunter and had many great stories of the hunt. He had a real love for German Shepherds and always had one or two with him at all times, they were smart and loyal and loved to make fun, just like Danny.

Danny travelled back to England twice to visit Doris and even got to see his old farm in Cornwall, England. Danny was pretty clear that Canada was the greatest place to live, he liked England but loved Canada.

Danny had 12 grandchildren and he told them stories of good hunts and wild experiences on the job way out in the bush. Many campfires with laughs were shared between him and his grandchildren. Those who knew Danny realized his top-notch sense of humor. He often imitated the colorful characters in his life with great expression and everyone laughed. Danny was a sincere man and if he said something he meant it, unless he was poking fun which was something he loved to do.
He fought hard for three years against a devastating illness that took everything from him, but he never gave up hope. He was surrounded by his family as he reached the other side.

The other side is a cool November day with snow on the ground……maybe a little bit of wind out of the west, the best time to hunt a moose.

Danny will be laid to rest in Halcourt Cemetery in a private ceremony. He did not want a funeral and hoped that everyone would remember the good times they had together in lieu of a ceremony, and to support his family when you happen to see them.

He will be missed by his partner Connie, children: Darren (Melanie), Lana (Dan), Charly (Keith) and Morgan (Jason) along with his 12 grandchildren.

Danny was pre-deceased by his father Godfrey, mother Doris and brother David (Anne).

Donations can be made to the Salvation Army or the food bank in his honor.

If you wish to donate financially to the food bank, feel free to mail us, or call us at 780-538-2848
Please, make cheques payable to: The Salvation Army – Grande Prairie.