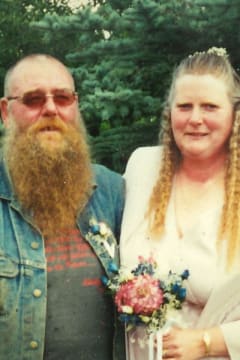 Obituary for Donald and Kellie McDonald

It is with great sorrow that we announce the passing of Donald George “Magilla” McDonald on February 14, 2020, followed by his wife, Kellie Elizabeth McDonald on February 16, 2020. Both passed away peacefully at the QEII Hospital in Grande Prairie, Alberta at the ages of 66 and 62, respectively.

Magilla was born in Killarney, Manitoba to Anne and Gordon McDonald. In 1957, his family moved to Grande Prairie, where he spend the majority of his life. His parents eventually had eight children in all, and raised them in Grande Prairie. As an adult, Magilla wore various hats—he was a mechanic, a roughneck, a janitor, a carpenter, and a camp delivery driver throughout his life. Throughout his life, Magilla’s biggest passion was motorcycles. He loved them, and could spend hours talking about them. When he met his wife and soulmate, Kellie, in 1982, his priorities changed. He was immensely devoted to her and his daughter, and worked hard his entire life to care for them. Magilla could always be counted upon to tell a funny anecdote, give a good piece of advice, or tell a profane joke.

Kellie was born in Fort St. John, British Columbia to Myrtle and Clifford Magee. Her family, including her brother and sister, lived much of their life in Taylor, B.C. and the surrounding area. Kellie’s passion for food and cooking was instilled in her by her father, a former Army cook. After graduation from high school in 1976, she attended culinary school and graduated near the top of her class. For the rest of her life, Kellie worked in kitchens, passing her knowledge along to countless coworkers. Her ability to cook and bake was the stuff of legend among her family and friends, and whenever there was a potluck, you could count on her to bring fresh, homemade buns. When Kellie met Magilla and subsequently became pregnant with their only child, a daughter, she walked the tightrope of being a working mom, and excelled at it.

Magilla and Kellie are survived by their daughter, Charlie (Steve). Magilla is survived by his brother Sandy (Sheila), sisters Marie (Bob), Joanne, and Jackie (Mark), nieces Shauna (John), Erin (Joe), Jessica (Errick), Shannon (Shannon), and Ferrin (Aaron); nephews Clinton (Carley), Shamus (Brittany), Dana (Chelsey), Ben, and Cole, as well as many great nephews and nieces. Kellie is survived by her nephew, Abe (Kellina). Magilla was predeceased by his mother, Anne; his father, Gordon; his sister, Carol; his brothers-in-law, Alec and Andrew; his brother, Andrew; and his sister, Barbara. Kellie was predeceased by her mother, Myrtle; her father, Clifford; her sister, Heather; and her brother, Brook.

Special thanks to all of the nurses on 5 North and the ICU at the QEII Hospital for the incredible care and dignity they gave to both Magilla and Kellie in their last days.

Steven and Charlie, So sorry about your parents Charlie. We are thinking of you and send our sympathy. Phil and Judy Barber
- na