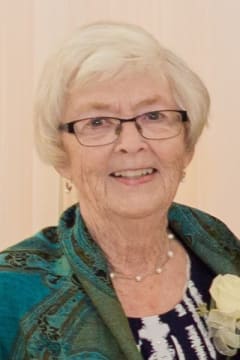 It is with sadness that the family of Lillie Doreen Makarenko announces her passing on February 25, 2020 at the age of 83 years. Doreen was born on March 5, 1936 in Prince Albert, Saskatchewan. The family moved to Fairview in 1944. Doreen continued her schooling in Fairview and later attended the University of Alberta Faculty of Nursing. She graduated in 1957 as a Registered Nurse. After graduation Doreen enjoyed a memorable trip touring Europe with classmates. Upon returning Doreen worked as a nurse in Edmonton. Doreen married Bill on June 27, 1959.

Doreen’s six grandchildren were loved, cherished and spoiled by their Granny. Granny and Grandpa took every opportunity to cheer on their grandchildren and to celebrate special occasions with family. Doreen enjoyed gardening, camping, travelling and sharing time at their farm in Highland Park with family and friends. Maui became their favorite winter destination. Doreen and Bill moved to Sherwood Park in 2016 to be near their family. In June 2019 they celebrated their 60th wedding anniversary.

Doreen was predeceased by her parents Herb and Gladys Lowe and her ‘sis’ Audrey Lawrie. Her memory will be cherished by her husband Bill, children Janet and Ken Arndt and their boys Taylor and Darrin, David and Melissa Makarenko and their children Lowell (Daina) and Jade; Audrey and Gord Klemchuk and their children Braylon and Bayley.

A celebration of Doreen’s life will be held at a later date.

Our sincere codolences in the loss of your wife, mother grandma Our thoughts and prayers are with you at this sad time Adrian and Carrie. Richardson
- na