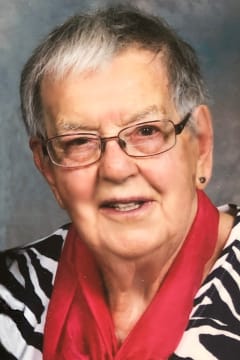 Doris Lancaster passed away June 21, 2022 at the age of 99 years. We are basking in the memories of being raised by two loving parents and are comforted knowing Mom is right where she wanted to be, with Dad on his birthday.

Doris was born February 14, 1923, the eldest of three children born to Cyril and Eva Stent on a farm near Carlyle, Saskatchewan. After completing school she received her LPN at Las Pas, Manitoba. The hospitals she worked at included Summerland, B.C., Manning, Fairview, Grande Prairie Swan Haven Nursing home and pediatrics at the Calgary General.

It was in Manning that she met her future husband. Having time off at Easter but not enough to travel home, a colleague invited her for over as her parents and brother were coming for Easter weekend. The rest is history.

Growing up, one Christmas is especially vivid in our minds. We awoke to find our dolls dressed in wedding dresses sitting at children’s table and chair set. The next generation’s cabbage patch dolls sported fur lined hooded parkas and each grandchild had a quillow – a quilt that folded into a pillow. There were Bingo games that were rigged so each one playing got a prize.

Doris loved bargains. Back when unlabeled tins were marked down she could tell what was in the cans by the sound when she shook them. She took in babies waiting to be adopted out; the last being our brother John. She found meal preparation easy and had boarders; the last becoming a son-in-law. She enjoyed flowers and gardening. She and Max, upon returning to Grande Prairie in retirement, volunteered at the Arctic Winter Games in 2010 and again in 2018 for the Alberta Summer Games.

Doris enjoyed playing Scrabble. She usually won and even played a game when Max was in the hospital as well as when she was.

She cooked the whole time they were at Emerald Gardens and everyone anxiously awaited their poppycock at Christmas even this past December along with their Christmas newsletter. She had articles published in the Seniors Paper and when on trips she would pack you a lunch. Deviled eggs were the favorite and first to be gone.

Both she and Dad will be greatly missed but neither is alone. They were together seventy years and now they’re together again.

Doris was predeceased by her husband Max on May 4 and sister Audrey and brother –in- law Albert Schultz of Lamont, Alberta and sister–in-law Mabel Stent of Bridesville, B.C.

Doris is survived by her brother Franklin of Bridesville, B.C., brother-in-laws Bill Lancaster (Sue) of Vancouver, B.C., Gordon McNaughton of Red Deer and the many nieces, grand nieces, nephews and grand nephews .

The family of Doris Lancaster would like to thank Home Care, all of the staff at Emerald Gardens, Unit 12 and Unit 23 of Grande Prairie Regional Hospital, Dr. Richard Martin and Dr. Ian Renfree for their excellent care.

The immediate family will celebrate her life at a private gathering at a later date.