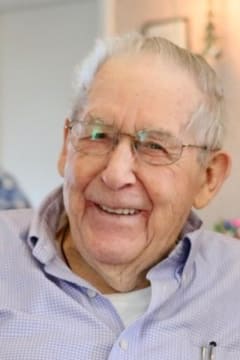 On March 5, 2022, Edwin Leroy Stewart passed away peacefully at the Grande Prairie Regional Hospital at the age of 89 years.

Born on January 1, 1933, Ed was the third child of Charles and Isabella Stewart. He had two older sisters Eileen and Leona and a younger brother Gordon. Ed grew up on the family farm at Baldwinton Saskatchewan, where he went to school and graduated grade 12.

In 1951, Ed met Christie Ball at his grade 12 graduation. They were married in 1953 in Neilburg Sask. Over the next 10 years, they added 2 daughters and 4 sons to their family.

Ed’s employment took him and his family to various locations across western Canada. Some of his many endeavors included working on the farm, Weed Sprayer for the county, bread transport for Honey Boy, and sales. The family started in Baldwinton and then moved to Langley BC with Honey Boy. In 1956 they moved to Edmonton where he was employed at a chemical plant and then to Lloydminster AB where he returned to work for Honey Boy.

In 1976 Ed met Audrey O’Connell at a Minus One Dance and Cupid struck, they were married in Grande Prairie in April 1979 and enjoyed 42 wonderful years together. They gathered up the children still living at home and moved to a quarter section near Sexsmith. Between them, Ed and Audrey had 11 children.

Ed and Audrey enjoyed their life in Sexsmith and became active in curling, Royal Purple, Elks, Gymkhana, GP Horse Racing Association, and several other groups. They spent a couple years living in Smithers, BC where Ed established and managed a new office for Nelson Homes. He then returned to manage the Grande Prairie office until his retirement. Ed and Audrey then made Grande Prairie their permanent home.

Ed remained active even in retirement and was always involved in various community groups, working on fund raising events and committees. He dedicated a great deal of time and energy to these groups and gained many memorable friends through his involvement in the community.

The family would like to thank Dr. James Pope and the Prairie Lake Senior’s Residence for their care and compassion.

The Funeral Service for Edwin Stewart will be held on March 12, 2022, at 1 p.m. at Bear Creek Funeral Home, 11802 99 Ave Grande Prairie, AB., with a luncheon to follow at Elks Lodge 10806 106 Street, Grande Prairie, AB. The funeral service and luncheon are open for all family and friends to attend. It can also be viewed live with the link below:

In lieu of flowers, donations may be made in honor of Edwin Stewart to the Parkinson Association of Alberta #103 10901 100 Street Grande Prairie, AB. T8V 2M9