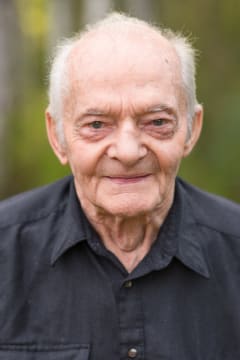 Elmer Orvel Sanders passed away after 97 years of devoted service to his family, faith, and friends.

As a farm kid from southern Saskatchewan, Elmer came from humble beginnings. Due to Economic Conditions in 1929, his family moved to Alberta, where they established a homestead along the banks of the Wapiti River, south of Wembley. Here Elmer and his brother George continued learning life lessons from their parents Alice and Marion.

Elmer's aptitude for mechanics allowed him to serve his country during WWII as an Aero Engineer. After his Air Force service, he moved to Edmonton, where he met and married Drusilla Burton. As devoted members of The Church of Jesus Christ of Latter-Day Saints, Elmer and Drusilla were married for time and all eternity in the Cardston, Alberta temple.

Elmer and Drusilla welcomed seven children into their family: Keith, Cathleen, Bruce, Douglas, Yvonne, Glenn, and Ronald. Together they shared their faith, and taught principles of love and trust in the Lord Jesus Christ. Throughout Elmer’s time in Edmonton, he continued his Mechanic career, owning his own garage and working for a variety of other shops, which provided for his family.

One of Elmer’s most cherished life experiences was to serve with Drusilla as missionaries for the church in the Washington DC temple, shortly after their return, Elmer moved back to the Peace Country with Drusilla who unfortunately suffered from dementia and passed away in Sept 2002.

All his life Elmer loved the outdoors, fishing, hunting, and camping. Building a log home west of Grande Prairie allowed him to pursue these activities well into his 90’s. In Elmer’s final years, with increased health struggles, he moved to the Wild Rose Manor in Grande Prairie. There he was often found playing cribbage, reading, or having much needed naps in his favorite armchair. Elmer had many wonderful friendships with
residents and staff.

Elmer shared his life with not only his seven children but also with his 25 grandchildren and 40 great grandchildren. Elmer spent time with his grandchildren telling them stories of the good old days and teaching them the “Right” way to do things.
Elmer is survived by Keith, Bruce, Doug, Yvonne, Glenn, and Ron.
Elmer was Predeceased by his daughter Cathleen.

FUN FACTS:
1. Elmer’s Favorite Colour was PINK!
2. Due to Elmer’s stubborn independence, he continued to drive his
own vehicle beyond his 97th Birthday!
3. All his life Elmer Claimed to be “ALLERGIC” to Cantaloupe

As a little boy, my life was made much better to see his example, and see the light of Christ shine so bright in an individual that was so beautiful and humble.
- A Friend
We are so sorry for your loss! Sending our sympathy and prayers to the family! Hal and Sherry Hanuse
- Sherry Hanuse
We are so very for your loss hugs to all our our love Dennis & Debbie
- Dennis & Debbie Rushton
We send our sincere prayers of love and support for all of you at this tender time. Kelly snd Julie Strong
- Julie Strong