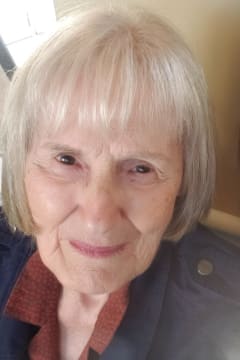 It is with great sadness that we announce the passing of Emily Hudson on May 4, 2021 in Duncan, B.C. Emily was born July 12, 1936 in Ksituan, Alberta, one of eight children born to Ahafia and Feodor Yanishewski. She is survived by her husband Harry, her three children Wednesday, George (wife Kelly), and Steven; along with her 5 grandchildren Pierce, Palliser, Phoenix, Roman and Ayla and her brother Danny.

Emily grew up in northern Alberta in the rural village of Ksituan near Spirit River. A strong homesteaders’ work ethic was instilled at an early age which fashioned Emily into the hardworking and enthusiastic woman she was so loved and respected for. She spoke often of those early days with great fondness, particularly the great love for her parents and the protective care of many older brothers. She never forgot the sacrifices made by her parents as new immigrants.

Emily married her first husband John Holmberg whose family owned the Hardware Store in Sprit River. They spent enjoyable times camping, fishing and hunting in the Interior of BC in Kitimat. Tragically, John was drowned in the Stikine River not very long after.

Emily met her husband for the rest of her life in Edmonton while taking a course at college. It was a thirty below night and she had trouble starting her car. Harry proved to be the knight in shining armour and the rest is history. After moving about for a few years – Calgary, Drumheller, Kitimat - Emily insisted they settle down in Victoria, B.C. Previously, Emily had worked at the Hudson Bay Company and for the Toronto Dominion bank but here she found her talents as an entrepreneur and salesperson blossom, beginning with Sarah Coventry Jewelry. Later she would find herself one of the top real estate agents in in the 80’s & 90’s in Richmond, B.C., an accomplishment she was immensely proud of and rightfully so, as she started out in a new city not knowing a single person. In addition, she would go on to acquire small businesses and run a BNB. Apparently the Yanishewski capacity for accomplishment is tough to match!

Emily took the strong sense of community she was born into and carried it into her volunteer work throughout her life. Her legacy includes raising funds to build the school gym for St Joseph’s Elementary School as well as daycare.

Emily may have left the farm but the farm never left Emily. For one, she drove like every road was a gravel road in the middle of nowhere and was known to hit a ditch or two in her 60’s and 70’s. The love of Land was there too. The family purchased a hobby farm while in Victoria with horses, Charolais cows and chickens. Later Harry and her retired to a log cabin they built on five acres in Wycliffe, BC. But we use the word “retired” lightly as Emily continued to volunteer at the local church, babysit, hike 30km mountain trails and garden.

Emily’s remaining five years were spent in the Sunridge Seniors Place in Duncan, BC where the dedicated staff helped care for her as she coped with Dementia which robbed her of many recent memories but polished the love and great kindness she had in her heart. Her last words were all about love.

Emily’s body will be laid to in Ksituan with a small funeral service (due to Covid restrictions) Wednesday, May 12, 2021 at 1 pm at St. Joseph’s in Sprit River. The service will be available online via the link below. In lieu of flowers please consider a donation to the Alzheimer’s Society of Canada.