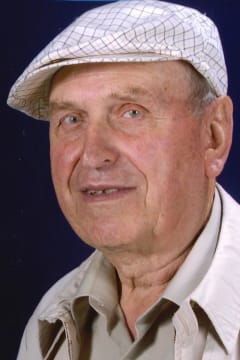 A private family graveside service for Errol Blimke will be held on Tuesday,

The family invites family and friends to join them at 12 o'clock for a reception at Bear Creek Funeral Home 11802 99 Avenue, Grande Prairie.

Errol Patrick Hugh Blimke, lifelong resident of the Grande Prairie Area, passed away at the Prairie Lake Seniors Care Facility on June 30, 2022 at the age of 99.

Errol was born on his family’s farm in the Five Mile Community to Albert and Martha Blimke on May 21, 1923.

Growing up on the farm alongside his 4 brothers and 2 sisters, Errol learned the values of hard work and honesty that he would live by all his life and pass along to his children.

Errol attended the Five Mile Public school until he turned 18 when he quit to serve his country in the army. After returning to Canada from his deployment overseas he took a homestead lease on land east of Grande Prairie. He broke this land and farmed there for over 70 years.
In 1952 he married Joyce Harris and they raised their two children, Darrell and Sandra on the family farm. Errol and Joyce continued to live and work on the farm until their well-earned retirement to Grande Prairie in 2007.

After moving to Grande Prairie Errol still managed to keep his hands in the dirt, growing a large garden until 3 years ago. When he wasn’t in the garden Errol enjoyed spending time in his wood working shop.

As well as a hard worker and dedicated family man Errol was an avid storyteller, regaling everyone with stories of his boyhood antics, army escapades and camping, hunting and river boat adventures.

Errol is survived by Joyce, his wife of 70 years, his son Darrell (Kate), daughter Sandra and grandchildren Jenna and William.

Thank you to the caring and professional staff at Prairie Lake who took care of Errol with such compassion.

Memorial donations can be made in Errol’s name to the Golden Age Centre 10222 101 Avenue, Grande Prairie AB T8V 0Y5.

A graveside service and gathering to celebrate Errol’s life will be held at a later date.