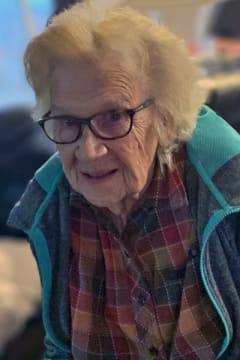 On Saturday, April 4, 2020, Frances Ruth Kennedy (nee MacMillan) a long-time resident of Grande Prairie, AB, passed away at the age of 91 years.

Ruth was born on December 5, 1928, in McLennan, Alberta to Daniel and Teresa (nee, Broughton) MacMillan. Ruth had ten siblings with whom she enjoyed good relationships, but she was especially close to her younger sister Edith (of Surrey, British Columbia), who she enjoyed weekly calls with right up until the end. She was also very fond of her sister-in-law Alice (Ted) of McLennan, Alberta.

She married the love of her life, Mac Kennedy in 1948 and they had seven beautiful children together (Corrine, Fred, Don, Randy, Douglas, David, and Judy). Ruth and the kids followed Mac as he moved around with the railroad, living in McLennan, Rycroft, Dawson Creek, and finally ending up in Grande Prairie. Many people will remember Ruth for working at the cafeteria in the CO-OP and helping with the Royal Canadian Legion Ladies Auxiliary.

She kept a clean house and fed Mac's sweet tooth with her baking - mastering among many things, baked bread, apple pie, cheesecake, chocolate chip cookies, date squares, and of course, her famous rice krispy squares. It was common to open her freezer and see a large stack of pan-size treats waiting to be eaten.

Ruth was not always the easiest person to get along with and was not afraid to share her thoughts and opinions, but she and Mac made a good team as he helped balance her and soothe her ruffled feathers. She liked to show her love for her family members by opening her home to them, allowing many of them to stay for a time and she was always generous with her treats.

Mac and Ruth were married for almost 57 years, living apart only for the last few of those as he progressed through the late stages of Alzheimer's. When he died in 2005, she felt quite lost, acknowledging how much he doted on her and how much she missed him. Ruth was no stranger to heartache as she and Mac weathered the loss of four of their children between 1951-1990, and a fifth child most recently in 2019.

She was predeceased by Mac, her parents Daniel and Teresa, children Douglas, David, Corrine, Fred and Randy, and all but two of her siblings.

Ruth was legendary for her love of bingo and the casino. She was a skilled cribbage player who
played weekly and competed in many tournaments over the years. She was proud to share stories of taking home the jackpot and tournament winnings. Ruth was always happy to play with anyone brave enough to take her on - but watch out on the rare occasion that you beat her; cards might end up all over the floor! In her youth, Ruth enjoyed sports but had to curtail these activities after she received a serious head injury while playing baseball. Ruth still liked to watch sports on the television, and she was particularly fond of watching curling.

She and Mac enjoyed travelling, whether that be on road trips to visit family or off to places like Nova Scotia, Hawaii, Alaska, and Mexico. They also loved spending time with the kids and grandkids out at their family cabin at Wapiti Gardens. After Mac passed away, she continued to enjoy going out to the cabin with family but would get awfully cranky if anyone slept in her bed or left the place messy. Eventually, Ruth sold their home and lived with Judy for a time, but then ended up moving into her apartment where she lived for several years by herself. She liked it because she could walk a short distance and catch the bus to go shopping. A few years ago, she decided to try living with family again and spent some time with her son Randy and his family and then more recently with Judy and her family. She remained active right until the end, and regularly took the bus to go downtown by herself. She passed away peacefully in her sleep and is now reunited with Mac and her other loved ones.

My condolences to the Kennedy family.Just to know that youre Mom and Dad are :tohether Again" What a gloriouse Easter they will have. The Donison and Kennedy connection, goes back a long way .Both families worked on the railroad, and also at the gr pr coop, Keeping you in our thoughts and prayers. Irene Donison Ponoka alberta
- Irene Donison