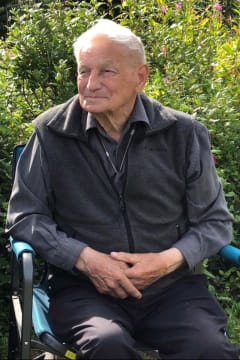 It is with heavy hearts we announce the passing of our husband, father, grandfather, great grandfather, brother and affectionately known to many as Papa; Frederick Gilbert Corfe. Fred was born on February 3, 1932 in Oshawa, Ontario and passed away on July 19, 2022 in Grande Prairie, Alberta at the age of 90.

Fred’s life was one of many adventures and journeys. He has had such an impact on so many people! He was a force to be reckoned with and a man of such wisdom and strength! He lived his life so completely and taught us to do the same! He was a mechanic, machinist, millwright, teacher, mentor, inventor, creator and well really anything he wanted to be or do! We will miss his easygoing demeanour, wisdom, advice and dry witted humour.

At the age of 80 he was diagnosed with stage 4 kidney cancer that had metastasized to his lungs. This however was not going to define him and he took it on as a challenge and he said I will beat this! Against all odds and with a struggle, he did of course beat it and it remained in remission! He would say believe it and just do it. Throughout our lives he would also say whoever told you life was going to be easy was lying to you.

Fred is survived by his loving wife Joan of 65 years, 8 children along with their spouses and partners, numerous grandchildren and great grandchildren. He was always proud to say that together they made over 130 offspring and would jokingly say, see this is what can happen! Fred is also survived by his sisters, “Dolly” Ellen Brown, Shirley Haeberle, brother, Dennis Corfe, numerous nieces and nephews and other extending family.

As per his wishes there will not be a funeral service. Celebrate each day to its fullest and live while you’re alive was his mantra.