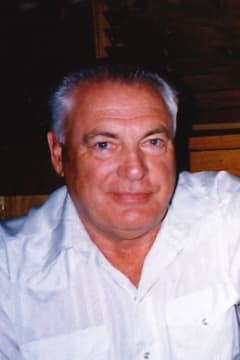 It is with great sadness that we announce the passing of George Birkley Ross, beloved Husband, Father, Brother, Grandfather, Great Grandfather, and Friend. He passed away peacefully in his sleep on November 9th, 2020 with his family by his side, at the age of 86.

George was born and raised along the Halfway River, northwest of Fort St. John. As a young man he participated in many rodeos, even competing in the Calgary Stampede!

He started his work career as a bull cook for a helicopter camp in Mayo. From there he moved horses from Fort St. John to Dawson City, then joined his oldest Brother in the purchase of a water truck, eventually buying him out and running the truck on his own. From there he went to Vancouver to get his welding ticket and purchase a welding truck, as well he hauled mud out to the rigs.

He moved to Slave lake where he met his future bride Peggy Fells. He started a slashing crew, and then went on to consulting with Jack Vanstone in High Level. While in High Level he studied for and received his commercial pilot’s license and flew many flights for Kenn Borek air Ltd. as well as others.

On to Hinton where his plan was to be a guiding outfitter. That did not turn out the way he wanted, so he turned his horses loose and went oilfield scouting for Art Webb in Slave Lake.
Around 1968 they moved to Edson, where George started Geo B Ross Trucking Ltd. doing road construction and hauling logs, water, gravel among other things.

George and Peggy were very active in the community, helping with the golf and curling clubs. George was also very involved with the Edson Arrows Jr. B hockey association. They were in Edson until about 1990, when George retired to Grande Prairie, spending the winters in Mesa, Arizona enjoying the sunshine and many golf games. In the last few years he was unable to go to Arizona so he enjoyed spending time with his Grandkids and finally Great Grandson.

A graveside service will be held for George on Saturday June 26th, 2021 at the Fort St. John Cemetery in Fort St. John, BC at 1:00pm their time. For those unable to attend, there will be a livestream available using the link under George's obituary on this page.

To Peggy and all of George's family my sincerest sympathy!! He was a great person to spend time with!! My you all fine some peace in your memories of George! We've all enjoyed many visits and good times with both George and Peggy inMesa!!🙏🏻 This is from All Of Leo and Ruth Fortier's family!
- Joan McPhillamey
So sorry to hear of George's passing. Our deepest sympathy's Peggy to you and family. Gerry and I have a lot of fond memories with you and George.
- Al Johnson
Peggy and family so sorry for your loss. Our thoughts and prayers are with you through this sad time
- Dianne Firth
VERY NICE PICTURE AND WRITE UP ABOUT GEORGE. HUGS TO YOU ALL.
- MARYLOU PODULSKY