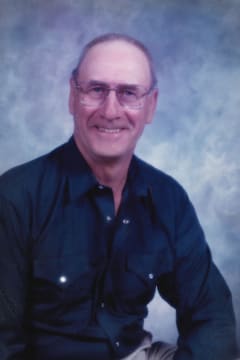 George Caouette, longtime resident of Grande Prairie, passed away peacefully on June 17, 2022 at the age of 82, after a long battle with dementia.
George was born August 29, 1939, the eldest child of 4, in Bonnyville, Alberta. His younger years were spent logging in BC as well as carpentry in the Bonnyville area where he built many houses.
He married Alice Cote on August 2, 1961 and they had 5 children; Cecile (Rene) Bertrand, Gerard (Shelley) Caouette, Louis (Gayle) Caouette, Joe (Brenda) Caouette and Pauline (Dave) Fournier.
After he married and started a family, George settled in to farming in the Bonnyville area. He also worked and owned the Lakeland Meat Packers. In 1980 he ventured northwest to the Debolt, AB area and continued to farm.
George lost Alice on August 18, 1980. He later was remarried to Emily Watson on November 14, 1981 and they had 2 children; Michael Caouette and Michelle (Chad) Reigling.
He eventually retired from the big farm to his hobby farm in Bezanson, AB. With his new acreage, he spent time logging and sawing some trees from the land and with this lumber he built his last house. There he also kept busy with his small herd of calves, his garden, fruit orchards and was still always building something.
George enjoyed travelling, and some of the places he visited included; most of Western USA, Canada, Alaska, New Zealand, Mexico and Tuktoyaktuk where he dipped his toe in the Beaufort Sea.
He enjoyed dancing and going to the summer music jamborees. In winter, he enjoyed reading, puzzles, playing cards and his pool table.
George will be forever remembered by his 7 children, 19 grandchildren, and 19 great grandchildren, his siblings Georgette Veillette, Denis (Darlene) Caouette, Celine (Jeff) Campton, as well as numerous nieces and nephews.
He was predeceased by his wife, Alice Caouette, his parents, Bernadette and Henri Caouette and two great grandbabies, Tristen and Kelly.
A Memorial Service for George will be held on Thursday, June 23 at 11am at Bear Creek Funeral Home, 11802 99 Avenue, Grande Prairie with a luncheon to follow. Interment will be in the Holy Rosary Catholic Cemetery in Crooked Creek.