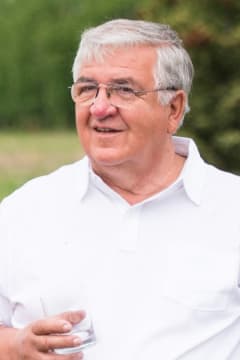 March 12, 1946 – May 26, 2021
It is with great sadness we announce the sudden passing of George Maynard Schonnop in Calgary on May 26, 2021. He was our brother, uncle, brother-In-Law, husband and step Father, he was loved and will be dearly missed. George was born in Grande Prairie March 12, 1946, the 2nd oldest of five children to Desmond (Dempsey) Schonnop and Josephine (Dollie) Reaume.

He started his career as a mechanic in Spirit River for Dave Ross at the JOHN DEERE dealership. He received his motor mechanic and heavy-duty mechanics license through SAIT in 1967. He then went on to receive his welding license in 1968 and married Faye Forsberg. After moving to Edmonton in the late 60’s, George attended night school and to make ends meet worked as a long-haul truck driver, moving heavy equipment all over North America during weekends and summers. In 1970 he was hired as an instructor in the automotive department at SAIT, so this meant a move to Calgary for George and Faye as he started his career with SAIT that spanned 40 years.

While teaching and being in a management position at SAIT, George began travelling up to the La Glace area to clear a section of land that his mother owned in hopes of doing some farming. Working with his older brother, Des, and a small CAT that they purchased, the two brothers began clearing the heavily treed land. George spent many years on the highway travelling back and forth from Calgary to the farm. As well as farming his mothers’ section, George farmed the original homestead that his grandmother had settled the family on in the early 1920’s and was also able to purchase the section of land that was originally owned and hand cleared by his uncle Bill. Farming was a passion for George that was also a family affair. Every summer for the better part of 40 years he worked the land. For the first 10 years, he worked along side his brother Des. When Des left the farming operation George then teamed up with his sister Inez, and together they farmed the family land for 30 years. Over the years George had many good friends and neighbours in the La Glace area and very much enjoyed spending time there.

George had a love for downhill skiing, so for many years there were countless weekend trips with friends and fellow SAIT staff. He also very much enjoyed curling and was on a team for many years.

In 2010 George retired from SAIT and that gave him and Faye time to do a bit of traveling with their trailer and spend more time at the farm. Faye passed away in February of 2013 after 44 years together.

In 2014, George and his dear partner Terry, started their adventures together. First travelling into the states with the holiday trailer and then finding a condo in the Phoenix area. They were a fun couple to visit with, conversations were always a lively affair, and George absolutely loved their time together. Terry also joined the family farm team. George continued working on the farm alongside his sister Inez, her husband Dale, and Terry taking on the role of cook during seeding and harvest time. The last few summers were spent at the farm but during the winters, George and Terry enjoyed spending their time between Calgary and Arizona chasing the sun.

George will be remembered for his love of mechanics, his commitment to the farm, his tenacious nature, and a love for the open road. George is predeceased by his mother and father, his sister Denise (Peachy) his brother Des, his infant son Kelly, and his wife Faye.