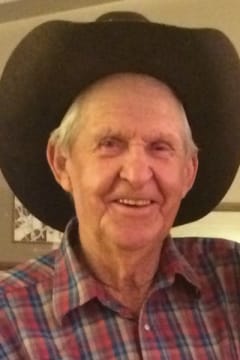 We are very saddened to announce the passing of Gordon Michael (Mick) Ryan on May 23, 2020 in McBride, BC at the age of 87 years. He was a wonderful father, grandfather, great-grandfather, brother and friend to many people.
Mick was born in Wembley on August 2, 1932, the third of seven children to James and Edith Ryan. Dad was raised in the “Meadows” south of Grande Prairie and was a long-time resident of the Grovedale area right up until his passing. He married Margaret Jean Dean on June 23, 1955 and raised five wonderful children, which he was extremely proud of.
During his life he farmed and raised many different animals, including: sheep, pigs, chickens, ducks and cattle to name a few. Dad was an avid horseman, known to many as Cowboy. He loved sports and played fastball, slowpitch, broomball and pool. He was a member of the Grande Prairie Pool League for many years and was still playing pool up until his passing. He won many pool games and tournaments in his lifetime; even playing in Las Vegas, with his daughter Barb and son Tom, a few times. Dad left a strong impression on those he met and had a great sense of humour; always playing jokes or telling stories to make people laugh.
He is survived by his children: Leona (Kelly) Eyben of McBride, BC; Thomas (Shelly) Ryan of McBride, BC; Barbara (Darcy) Sask of Camrose, Alberta and Patricia (Kenny) Trarback of Grovedale, Alberta. His grandchildren; Amy (Dwayne) Vause; Steven (Jenna) Eyben; Amanda Eyben; Coltan (Meagan) Ryan; Craig (Bryony) Ryan; Custin (Suzanne Lawrence) Ryan; Pamela Sask; Michelle (Thomas) Dykstra; Marshall Trarback; Marissa (Matthew Sacco) Trarback; 19 great-grandchildren; daughter-in-law Cheryl Ryan and numerous other relatives and friends, too many to mention.
Mick was predeceased by his parents James and Edith Ryan; son Donald Ryan; sister Lois Lofstrom; brothers in-law Alphons Lofstrom; Morris Lofstrom; Mike Mazur and Bruno Sonnenberg.
A celebration of life for Mick Ryan will be held on Saturday, August 1, 2020 at 2:00 PM at the Bear Creek Funeral Home. With limited attendees allowed to gather due to Covid-19 restrictions, Live streaming will be available through Bear Creek Funeral Home’s YouTube channel for those who are unable to attend.
Donations can be made to the Heart and Stroke Foundation or a charity of ones choice.
Rest in Peace Dad, we miss you very much.

Although Our Farm was in the Wembley area, I did not meet this lovely gentleman until he was dating my friends mother who was from Vernon. We spent a lovely afternoon floating around Swan Lake reminiscing about Wembley and GP. He told me all about his pool playing.. Condolences to his family from myself as well as from the Illerbrun family in Vernon
- Deb Joell