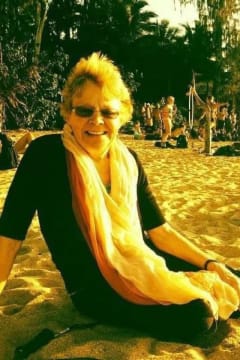 It is with great sorrow we announce the passing of our mother and grandmother, Hazel.

Mom was born in Golden, BC and was raised there. In her late teens she moved to White Fox, Saskatchewan and met and married Stanley Temple. Together they had 4 children. At the age of 24 she became a widow and moved to Calgary where she did her best to raise her children as a single mom in a time when that wasn’t easy. She met Bob Parisien and married him in 1977 and they relocated to the Stony Plain/Wabamun area, close to Edmonton. She remained there until 2014 when she moved to Grande Prairie where she lived until her passing.

Mom loved animals, gardening and the outdoors. In her later years she took up sketching and painting which she became very good at.

Mom left us so fast that we weren’t able to tell her how special she was and how much she will be missed.

She was predeceased by her father, William Hewitt, mother Martha Helen Hewitt, and her husbands Stanley Temple and Robert Parisien.
A Celebration of Life will be held at a future date.