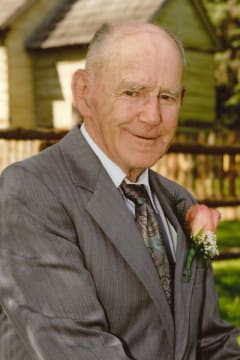 Henry Schoorlemmer, long-time resident of Rycroft, passed away peacefully on Tuesday, June 14, 2022 at the age of 96 years.

Henry was born in Heeten, Holland on May 6, 1926 the fifth oldest out of twelve.
He attended grade school until the end of grade 8. He then did two years of Agriculture school. In November 1946, he went to Artillery school, the 3rd BattKlass. He spent approximately five years in the Dutch army, two of those years were spent in Indonesia.

Henry and Gerda were married in a double ceremony with Herman and Bertha on April 23, 1957 in Holland. Shortly afterwards, they all travelled together to begin their married lives in Canada.
The first three children; Wilfred, George and Anthony were born in Edmonton while Henry worked on various dairy farms in the region. In August 1963, they moved to the Rycroft area with Herman and Bertha. For a time, they had to live in a granary. Then for two years both families lived in the same house together. During this time Bernard arrived. In 1965 Gerda and Henry bought their own farm followed shortly by the arrival of Everdien, completing the family.

Life on the dairy farm was busy, their days were long; milking cows twice a day, growing a large garden and raising five children. Sunday afternoons were spent with family and friends. Throughout all of this time Henry was an active member of the Knights of Columbus.

In 1989, Henry and Gerda retired and moved into Rycroft. Much to everyone’s surprise he took up many new activities. Golfing, downhill and cross-country skiing, swimming and playing pool at the Merry Pioneers. Many times his family would receive phone calls with concerns about him walking along the highway because walking in town was too boring. He could also be seen riding his bike all over Rycroft. He was still an active walker at the age of 93.

Henry and Gerda had the opportunity to travel, taking in the sights of Mexico and Reno on bus tours. They made their last trip to Holland together in 1989.

For many years, Henry dedicated his time to the St. Peter and Paul Parish.
Henry is survived and lovingly remembered by his family: Wilf and Jamie and their children Garett, Ryan and Kim, Aqueena and Alex (Henri and Ethan), Landon, Trenton and Carly (Madilynn and Mallory), Teneea, Levi and Brielle. George and Christine and their children Colton, Brenden, Ashton, Ella and Grace. Tony. Bernard and Susan and their children Brenton and Aaron. Everdien and Brad and their children Spencer, Noah and Tessa. He also leaves behind Bertha and her family here in Canada, as well as numerous family members in Holland.

He was predeceased by his wife Gerda of 65 years and Granddaughter Chelsea.
A special thank you to Dr. Kitagawa and the wonderful staff at the Central Peace Hospital. Henry was blessed to receive exceptional care and kindness at the Lakeview Lodge in Clairmont and LongTerm Care in the Central Peace Health Complex.