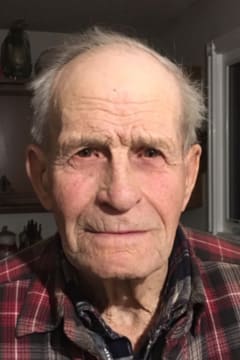 With sadness the family of Howard Chase announce his passing on November 15, 2022, in Grovedale.

Howard was born in Sundre, AB, to George Leroy Chase and Sarah Annie Chase (Maxim) on February 13, 1924. Howard was the youngest of three sons: first Russell, John and then Howard. Howard lived in Sundre, then moved to Hinton, AB, where he and his siblings were raised. Later moving to Grande Prairie, AB, in 1950, he worked as a taxi driver and met his soon to be wife Lucille Dechambre. They were married April 7, 1952, in Grande Prairie until moving to the farmstead in Grovedale, AB, in 1958 where they raised daughters Ann and Linda. He continued to reside in Grovedale until his passing at 98 years of age.

Howard enjoyed sharing stories of his childhood on the trapline in Hinton with his brothers. These stories always included the horses and dog teams they used for trapping. Howard continued his love for animals on the farm he and Lucille shared. Starting from very little, working the land, raising cows, chickens, horses and growing crops and a garden to provide for his family. Family being close was important- Howard enjoyed watching the grandchildren and great grandchildren learning and playing on the farm while sharing his bits of wisdom.