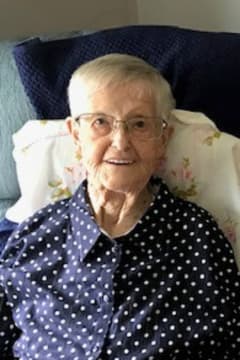 Irene Lillian Sorgaard resident of Grande Prairie, formerly of LaGlace, Alberta passed away November 17, 2022 at the age of 95 years.

Irene was born on April 1st, 1927, to Ingrid and Gustav Lagregren in Edmonton, Alberta. Her younger brother Donnie was born 4 years later. Irene attended school in Edmonton and her first job was working for Pacific Airlines. She then worked as a stenographer for Prairie Farm Assistance for 21 years.

During this time, she also became a lifelong member of Sons of Norway. While attending the 75th Bardu school reunion with her Mom, she met her future husband. Both their Mothers attended school there together. They were married in October of 1969 and had recently celebrated their 53rd anniversary. Their first winter was spent out at Bear Lake Logging Camp. They continued farming in the summer and working out in the winters. Irene spent a few years at the LaGlace School as a secretary while Lavern worked as a carpenter. When Lavern became a county councillor, she enjoyed being his secretary and travelling with him.

She was a member of the Calvary Lutheran Church. It’s impossible to know how much money was raised from her donations of the many handmade mittens, toques, socks, sweaters, afghans, etc. She was always knitting or doing something with her hands. All the family benefitted from gifts every birthday or Christmas.

She was predeceased by her parents, her brother Donnie and niece Linda.

Donations may be made to the Calvary Lutheran Church PO Box 204 LaGlace, Alberta T0H 2J0.