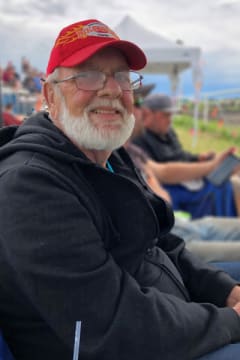 It is with great sorrow that we announce the peaceful passing of Irwin Gordon Durrah on August 15, 2020 at the Queen Elizabeth II Hospital in Grande Prairie, Alberta after a courageous battle with cancer.

Irwin was born in Sydney, Nova Scotia on October 21, 1951 to the late George and Christine Durrah of South Bar, Nova Scotia.

He is survived by his wife of 39 years Brenda Durrah (Hooper), his daughters whom he adored; Meghan (Mark) Nicholson and Amy Durrah, and his precious grandchildren Logan and Daxon Nicholson. He also leaves behind his brother Kevin (Audrey) of South Bar and many cousins.

Irwin worked at Sydney Steel for 30 years and retired in 2000. In 2003 he reconnected with his love of biking and took great joy in riding his Harley each summer. He had many great friends throughout his life and in his later years missed very few days at the office in the pier for meetings with his friends and storytelling. He loved a good story!

As per his request, cremation has taken place and there will be a private graveside service at a later date.

“Rest in peace my love.”

I was shocked and saddened to hear of my Cousin Irwin's passing. I had not been in contact for many years, but I will treasure the great memories of our younger years. I extend heart felt sympathy to Brenda, Meghan, Amy, Kevin and Audrey. Rest in peace.
- Sarah Boivin
My prayers and thoughts are with you and your family at this time. I've never forgotten you over the many years.
- Gertrude Maxwell
Our sincere sympathy. Thinking of you at this difficult time. Pat and Dave Murray
- Patricia Murray
So sorry for your loss. Our hearts and prayers are with you all at this difficult time. Love Patsy and David Murray
- Patricia Murray
So sorry for your loss prayers and hugs sent your way Karen from first choice haircutters
- Karen laffin
I am so sorry for your loss Brenda and family prayers sent your way hugs Brenda from Karen formally of first choice haircutters
- Karen laffin
My thoughts and most sincere sympathies are extended to Erwin's family and friends. Such a great guy. He will be missed at Tim Horton's in Whitney Pier. Ride on Irwin, ride on.
- Al Crawley
So sorry to hear of Irwin's passing. He was always so friendly and of course ready for a good story. He left behind many memories for sure. Wishing the best for Brenda and family. Kevin Primmer/Gen MacLeod
- na
My sincere Condolences to Brenda, Meghan and Amy. I have many fond memories of riding on the back of cousin Irwin's motorcycle! I will miss his yearly visits to Judique. Take care all.
- Susan Moran
So sorry to hear of Irwin's passing.... My deepest sympathy to Brenda and family.
- Emily MacNeill
so very sorry to hear of Irwin's passing, he was a friend for many yeears, although we lost touch many years ago, I still have fond memories of Irwin, Chris and George, also his grandmother, Mrs Sarah Durrah...rest in peace my friend, my condolences to his Family and to Kevin.
- Serita MacLellan
So very sorry to hear of Irwin's passing. He was such a great guy and I'm sure he'll be missed by all who knew him. Valerie Barrett.
- Valerie Barrett