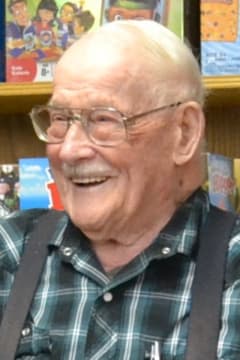 The HEART and SOUL of AL’S NEWS has stopped beating.

We are saddened to announce that James Goldsack has passed away at the age of 99.
James was known as Dad, Mr. G, Papa and Papa G. by his family and friends.

Dad did many things in his life he joined the army at 17; he worked at the University of Alberta for some time in shipping/receiving. He bought a general store in Prince George, then the family moved to Port Coquitlam where he invested in a game show called Minutes the Limit that didn’t work out. They moved to Red Deer 3 months later starting another store similar to Al’s News, he sold that one and then moved to Grande Prairie where he took over Al’s News from the original Al, saying to Mrs. G that they would only be here for a couple of years which turned into 62 years.

He was well known for his beautiful flowers and garden. Anybody who walked or drove by his house would comment on how nice it looked. His red Geraniums and yellow/orange marigolds were his signature flowers.

It would bring him great joy to start pouring over his seed catalogues in early January, tending to his plants in the greenhouse until he could get them planted outside. He loved his flowers, garden and especially his tomatoes. He spent a lot of happy hours in his greenhouse/garage. Tinkering on something broken from the store or tending to his flowers.

He was ecstatic when Pat came into the picture to share his love of flowers and garden. Sharing his knowledge with her brought him great joy. By the time he couldn’t do it himself she knew what went where, and if she didn’t, she could always count on him (even at 99) to tell her, he was very sharp right to the end.

He enjoyed going down to the store to spend Christmas eve with many old and new friends.

He was a very quiet guy never saying much, sitting quietly while Mrs. G spoke for both of them at any of Jim’s sporting events.

Mitchell remembers Papa driving them to school and embarrassing them by whistling at the girls and picking them up and going the long way home, so he could spend more time with them. Mitchell inherited the job of planting the greenhouse tomatoes and stringing them up. Mr. G would always say call Mitchell he does a good job with the tomatoes.

Jeremey remembers going for walks in the park with Papa, with one of their Samoyeds and watching him tending to his seedlings in the greenhouse.

He loved children and his eyes would light up and twinkle whenever Jamie or Stacey’s kids came visit.

After Mrs. G (Mom) passed, Pat and her Dad started playing crib Monday nights with Mr. G and Jim. Lots of fun was had and a few $5.00 bills were passed back and forth. Mr. G enjoyed this evening, asking Jim on Tuesday if we were playing on Monday. He looked forward to it.

He knew what he liked and didn’t, right to the end, when Pat would come in at supper time, he would want his oxygen off right away, no matter what Pat said about how it was helping him breathe easier. The word OFF came through loud and clear. She said you’re going to be ornery right to the end aren’t you. He just smiled.

We would like to thank Jamie for her love and dedication to Dad she was there every morning for breakfast putting a smile on his face and had him laughing most mornings. He really enjoyed you.

Mr. and Mrs. G had a bond that is very rarely seen in this day and age. Their love for each other was shown in their eyes and their actions. They would do anything for each other.

James is survived by his son Jimmy (Pat Stevenson), daughter Brenda Cornell, grandchildren Jeremy (Tammy), Mitchell (Kelsey), Gail and Christopher, great-grandchildren Ben, Aislinn, and Aiden. He will also be missed by Pat’s children Jamie (Jon), Amber (Billy), Stacey (Logan) and their children, as well as his brother and sister-in law Ted and Irene and sister Florence.

The first of the month was very prevalent for the Goldsacks’ in the last year. Losing Mrs. G on November 1, Mr. G having a stroke on April 1, and losing him on July 1. With this thought we will be having both Mom and Dad’s interment for family/friends October 1 at Evergreen Memorial in Edmonton. A luncheon will be held after.

For all their and our friends in Grande Prairie a “Celebration of Life” will be held on Sunday the 17 between 1-4 at their place.

Mom and Dad were well thought of amongst their Family, Friends and Community.

We would like to thank the Staff at Prairie Lake Hospice for their wonderful care in the 2+ months that Mr. G was with them. We know he stole a piece of your hearts.

In lieu of flowers, donations can be made to the Prairie Lake Hospice in memory of James.