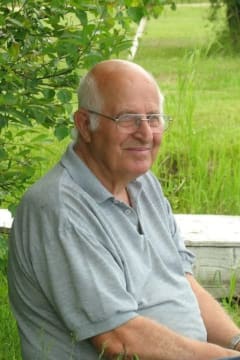 It is with heavy hearts, we announce the passing of our beloved father, Jean Roch Belzile on March 25, 2021, at the QEII hospital in Grande Prairie, Alberta. He lost his bravely fought battle with Parkinson’s dementia and other health issues. Jean was in care at Mackenzie Place in Grande Prairie since 2018.

Jean was the eldest of the 14 children of Fenelon and Jeanette (D’auteuil) Belzile, residing in St. Donat, Rimouski County, Quebec. In 1951, the family relocated to Alberta to form the new community of Marie Reine. Jean was in his late teens by then and was already a hard-working farmhand and an accomplished truck driver. In 1954, Jean married Jeannine Laliberte and they started their family life in Marie Reine. They moved to Hinton in 1970 where Jean was a driver, then an owner-operator of off-highway logging trucks, and highway haulers for many years until his retirement. His wife, Jeannine Belzile, passed away in 1981. In 1985, Jean married Bertha Bouchard-Pelletier. They resided in Hinton until Bertha’s death in 2004. He then moved to Falher to be closer to family and lived there until he went into extended care in 2018.

We would like to take this opportunity to send a shout out to all of those who were involved in Dad’s care. There are many of you and we can not thank you enough. We are beyond grateful that Dad was placed at Mackenzie Place.

A service and interment for the late Jean Roch Belzile will be held in Hinton Alberta on a later date.

My sincerest condolences on the passing of Jean. My time in Falher was made all the more enjoyable with our conversations in the apartment building.
- Ian Wallace
My sincere sympathy to all the Belzile Family from Lorraine Gour and Family
- Lorraine gour

Norman, Sylvia and ALL the BELZILE Families Please accept our sincere condolences in Jean Roch passing. May you find comfort in his memories and may God grant all of you strength in this difficult time. You are all in our prayers. Robert & Alice Belzile
- Robert & Alice Belzile
Norman and Family Please accept my sincere condolences and prayers during these difficult times in your life. I PRAY that GOD will BLESS you all with his LOVE knowing that your Father is now in PEACE. First time I met your Father was in Hinton when he was married to Bertha. A fine and respectable gentleman that I had. the opportunity to know and having good memories of our visits. GOD BLESS YOU ALL . John Soucy (Procter and Gamble.
- John Soucy

Our deepest condolences to all the family
- Francine Laliberte

Our sincere condolences to all of the family.
- Francine Laliberte

We love you Dad and wish you could stay, but if our Lord needs your help in Heaven, well then it's pedal to the metal.
- Norm and Sheryl

Our sincere sympathies to ALL the Belzile Families in the loss of Jean Roch. May your cherished memories help to comfort you all at this sad time. He fought a hard and long battle; but he is at peace now. Our thoughts and prayers are with you all. Rest In Peace Jean. Leo and Nancy Ethier
- Leo and Nancy Ethier