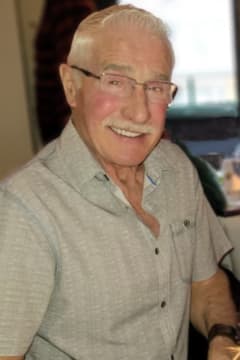 Jim, a lifelong resident of Grande Prairie Alberta, passed away peacefully surrounded by family at the age of 75.

He will be sadly missed and cherished by his wife, Twyla, of 37 years. They were blessed with two sons, Layton & Rick. Jim loved his family, first and foremost and it brought him so much joy to spend time with his wife, sons and later on, his grandchildren.

He was a Power Lineman, retiring from the trade after 42 years. During these times, he met many of his lifelong friends and these friendships carried on after his retirement years. Often, you would find Jim and Twyla travelling abroad or taking trips with their friends. Jim loved the outdoors, and he lived an active lifestyle with many passions; skiing, swimming and camping, just to name a few.

Jim was always happy and had a heart of gold, family and friends meant the world to him. He was a great storyteller who could capture your attention whether it was sitting around the kitchen table, or around the campfire. He knew how to spin a tale and hit the punchline just right, leaving a smile on your face and laughter in your belly.

Jim was predeceased by his parents, Tom & Betty Eskdale and his sister Sandra Gacek.

The family would like to thank the staff at The Grande Prairie Regional Hospital, unit 23 for their care and compassion.

In lieu of flowers, donations can be made to The Canadian Pulmonary Fibrosis Foundation.