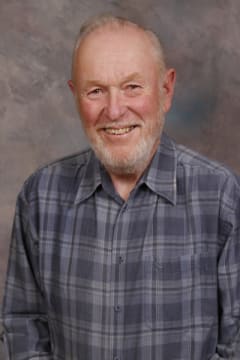 It is with sad hearts that we announce the passing of our very special husband and father, Brian (John) Primeau at QE II Hospital in Grande Prairie, Alberta on Saturday, February 15th at the age of 80 years. Right up to the end he was surrounded by the love and warmth of his family and the wonderful and caring nursing staff on 3N as well as Dr. Afridi.

Born in Hamilton, Ontario on July 22, 1939 as John Paul Sullivan, Brian was adopted right out of the hospital by Mary Primeau. While his mother attended law school in Toronto, Brian attended private schools - Weycroft and Applebee College in his early years. He and his Mother then moved to Kitchener, Ontario where Brian completed his formal public schooling education.

He was always adept with his hands, so his education continued in the trades, including electrical, furnace repair, plumbing and gas fitting. He served 5 years in the Royal Canadian Navy in Electrical Air and later another 5 years in the Air Element of the Canadian Armed Forces in Construction Engineering.

Retiring from the CAF, Brian worked for Virene Plumbing and eventually opened his own plumbing & heating business, Prairie Plumbing, along with his friend Dennis Casavant. He then went on to work for the government and private enterprises as a Plumbing and Gas Inspector.

Wanting a change, he got his Class 1 license and along with our son Steve, drove and operated Primeau Hauling for several years. Brian was never out of a job; even in “retirement” he kept busy helping family and friends with many projects and took on the part time job of cleaning our church!

Brian loved riding motorcycles, mostly English bikes, and rode from the time he was 16 until he was too old to ride (and Diane wouldn’t let him ride anymore for his own safety!!).

He was a most wonderful person and the world will be a little less without his smile and friendly personality!

Brian was predeceased by his parents: Mary & Duncan Currie and Delores MacLeod, and his brother Fraser MacLeod.

Brian’s Funeral/Celebration of Life will take place on Tuesday, February 25 at 11AM at Trinity Lutheran Church.

* Since Brian always was a great storyteller and you’ve probably been a recipient of at least one of his stories, we’re asking each of you to share with the family in words and/or pictures your “Brian story”. Paper and a basket will be provided for you to deposit your submission. The family thanks you for your submissions that will be bound into a book.

Serge Allard lit a candle Monday, February 24, 2020 We want to send our deepest and sincere condolences to the Primeau family. From your Serge and Tracy Allard and management.
- na
Our thoughts and prayers are with Brian's family. His smile was contagious and his humor always made us smile. He will be missed. Ray & Dianne Laurin
- na
My deepest condolences to the Primeau family! Brian was one the best people I ever met while I was working for the Province of Alberta! An all around good guy! Bob Easton
- na
That Brian was loved by all of his family and so many friends is a testament to his person - a real gem. His passing leaves a hole in so many hearts, yet so many wonderful memories and shared experiences. My thoughts and prayers are with all who knew and loved him. Helen Hoey
- na
Our thoughts and prayers are with you Diane and family. We have many fond memories of Brian. His dry humour and caring for all those around him, especially his family. Dave and Ruth Wylie
- na
Dear Diane and family: So sorry to hear of Brian`s passing. Our thoughts are with you at this sad time. Sandra Bishop
- na
We will miss our dear friend Brian! Sorry we will be missing his Celebration of Life but we will be there in spirit. Love, Brad & Diane Lamb
- na
It's been a long time since I've seen any of you, but you're never far from me. I'm sorry to hear of Brian's passing, he was a great person. Darren Silvaniuk
- na
Our sincerest sympathy to you, Diane and your family! We are sorry have to to miss the Celebration of Life service, but Hartmann has an appointment he has waited weeks for , which we feel he must keep! But Hartmann wants to express his gratitude for the support he received from Brian at the Bible Camp . It was good to see you here on Sunday! God bless you and your family, Hartmann and Eileen Nagel
- na
I am so sorry Brenda and Steve and the rest of your family! He was a great man who will be missed! Stay strong and hold each other! Lyndsay Horrigan
- na
I am very sorry for your loss. Although I have known many of the family for a long time, I only met Brian a few years ago. He was charming, intelligent , funny of course, and shared his great love for his family with me. He was simply a delightful individual. May the memories you have of your time with him help bring you peace. God bless you all. Carolyn Jones
- na
Diane and family, My sincere sympathy to you and your family. Alf always enjoyed working with Brian and valued his friendship. Sorry I couldn't make it to the service as I had another commitment.Thinking of you all at this time. Gwen Richards
- na