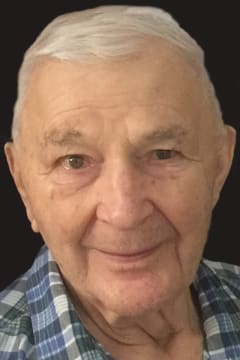 It is with profound sadness that we announce the passing of our Husband, Father, Grandfather, Great-Grandfather, John Daruda, age 94, on August 1st, 2021, at The Prairie Lake Hospice in Grande Prairie, AB.

He lived a long and productive life but suffered with a slow deterioration from AF Heart Disease, and we are eternally grateful that he is now at peace with his Heavenly Father. He waited 4 long months, wanting to join his Saviour.

John was born Nov. 8th, 1926 to his parents, Vasil and Anna Daruda in Terebla, Czechoslovakia. He immigrated with his parents and 3 siblings to Canada at the age of 3½. They settled in Telfordville, AB., to commence farming. It proved to be a hard life. He travelled around doing different jobs after leaving home but spent over 10 years ranching just east of Calgary. He later moved to Fort Nelson, BC to go into business with his brother Andy in an Esso Service Station in 1957. He met and married Kathleen Ann East of Grande Prairie, AB. in 1961. They adopted their first son, Allan in 1964, their daughter, Lisa Kathleen was born in 1969, James in Feb 1970, and Chris was born December 1970. Sadly, Lisa passed away in 1977. It was a loss that John never really recovered from, but he celebrated his 60th wedding anniversary in June 2021. He was a devoted family man, and his family came first, always.

John was a mechanic for many years but his real love was wood, and he switched to carpentry in 1970. He was an incredibly talented natural craftsman, and could build anything from furniture to homes to commercial buildings. Our family has many treasures that he built. He whistled as he worked with wood! He built a huge house with James at age 71 and renovated another completely at age 88.

After retirement he loved curling with his friend Edgar Wolf at Armstrong, BC, square-dancing in Vernon and spent many happy hours camping on the mountain lakes, fishing, and cutting fire wood. Gardening was a passion of his. He was a charter Member of The Lions Club, and a volunteer fireman in his Fort Nelson days.

He is also survived by his brothers, Andy (Lyn) Daruda of Kamloops, Matthew Daruda of Edmonton, his sisters Lucille (Gerald) Ohrn of Red Deer, and Irene Perley of Sechelt BC, sisters-in-law Lori (Lloyd) Lofstrom of Grande Prairie, Sandy East of Kelowna, Sylvia Worthy of Kamloops and brother-in-law Michael (Marianne) Tookey of Pentiction. There are also many nieces, nephews, and long time friends, Edgar Wolf of Vernon, Norm Blasovits of Edmonton, Arnold (Anna) Ladwig of Grande Prairie, and special friends, Charlotte and Ted Golnick of Grovedale.

He was predeceased by his parents Vasil and Anna Daruda, his parents-in-law Allan and Claire East, his daughter Lisa Kathleen, his best Friend Bill Simpson and sister-in-law Diana Simpson, also brothers-in-law Jim East and Tony Wasylciw.

There will be cremation with a graveside service at Glen Leslie Cemetery on September 18, 2021 at 2:00pm. The cemetery is located on Highway 670; approximately 25km outside of Grande Prairie, Alberta.

We cannot say enough praise for that facility and their kind and loving care. We are so grateful and wish to express our appreciation for Lori Bembridge, and Melissa Crerar and GP Home Care Staff, as well as Dr. C. Van Tonder and Laura, at the Sexsmith Medical Clinic: The Daruda Family.