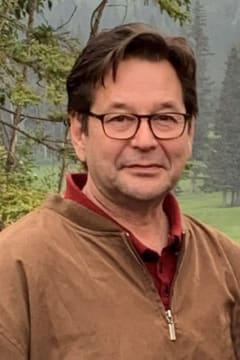 It is with deep sadness and heavy hearts that we announce that Kelly Buyar was tragically taken from us on August 26, 2022, at the age of 60 years.

Kelly was born in Fairview, AB, on May 12, 1962, to Walter and Isabel Buyar. Kelly along with his parents, sister, and brother lived in Hines Creek until early 1965, at which time the family moved to Valleyview. This would be home until he graduated from high school in 1980.

Having a love for cooking, Kelly decided to set out on his next adventure and moved to Edmonton to attend NAIT and take the Culinary Arts Program. Being the talented cook he was, he earned his Journeyman Chef Certificate and then he was off to practice his amazing new cooking skills and check out life's adventures. Jobs and adventures took him many places before he finally settled down in Grande Prairie.

Kelly met the love of his life, Linda, in 1999 when he moved to Grande Prairie. He surprised us all, as we had started to think that no lady was going to be able to tie him down, but Linda had the charm and stole his heart. Kelly and Linda were married in 2001, at which time he had the honor of not only becoming a husband, but a stepfather to Linda's two boys Cory and Tyler, who he loved dearly and later he had the joy of becoming Grandpa Kelly to five amazing
grandchildren.

Kelly's warm friendly smile and heartwarming personality brightened any room he walked into.
The kindness, generosity, dedication, and commitment he showed throughout his life made him a very special guy, who was an honor to know.

Kelly was blessed with having many amazing talents and skills. Whether it was preparing a meal, decorating a venue, planning an event, helping a friend/family/coworker, or just doing his job, you always knew he would give 150% and it would be done to his high standards.
Kelly loved people and a new challenge or adventure was never out of the picture. His most recent adventure was retirement, which sadly he never got to enjoy.

You can attend the service by live stream by clicking the link below:

Memorial donations can be made to:
STARS 1441 Aviation Park NE
Box 570
Calgary AB T2E 8M7
or a charity of your choice