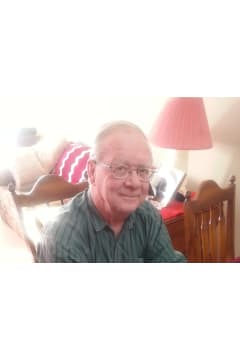 George taught in Grande Prairie for many years; when he retired, he taught one more year in Valleyview and then worked doing renovations. He was an active Masonic Member.

In 2006 George met Vivian and they enjoyed attending dances and jamborees. George also enjoyed celebrations with family. After he moved into Grande Prairie, he became more active in the senior community. He played cards at various locations, became the president of the seniors complex he was living in, helped to organize events and get the recycling program going. George was always willing to help anyone.

George was predeceased by his wife Helen in 2003.

A Celebration of Life for George will be held on September 5 at 11:00 am at the Grande Prairie and District Golden Age Center, (10222 101 Avenue, Grande Prairie.)

Very sorry to hear of Georage passing He was a very good neighbour for many years on oak dr God bless all your families in your time of sorry Ernie & Fay Beart
- Ernie Beart
To Tania, Patty, Scott and families, So sorry about your Dad's passing. Hugs to you all. Mary Sutherland and family
- Mary Sutherland

Offer words of sympathy and comfort, share a memory or light a candle.: