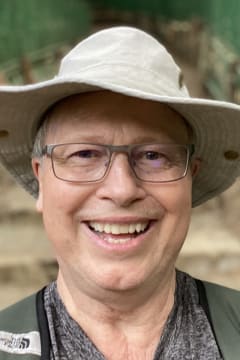 Lance passed peacefully on November 26, 2021, surrounded by his loving family, hours shy of his 65th birthday.

Born to parents Jack and Joan Lewis (née Moskalyk) on November 27, 1956, Lance spent his boyhood chasing after adventure—and mischief—alongside his brother Lynn and kid sister Lorraine, in the countryside of Victoria and Kamloops, BC. That sense of curiosity was a driving force throughout his life, pushing him to graduate with honours with a Bachelor of Science in Botany from the University of British Columbia and a Master’s Degree in Genetics from the University of Alberta. Lance, with his team, made important contributions to science throughout his 31-year career at the Agriculture Canada Beaverlodge Research Station, where he specialized in canola breeding.

Lance’s motto was “leave the world a better place than you found it”. Volunteering for local community groups, he proudly served as ‘Akela’ the Cub Scout leader, took leadership roles in 4-H (beekeeping, computers, woodworking, and small engines), and was an active member of the ‘large mammal fraternity’, the Beaverlodge Elks. In 2013, he travelled to Ethiopia with ANSO, assisting with the organization’s good works in promoting education and sustainable rural communities. In addition, Lance believed in direct philanthropy—improving the lives of people he met—whether that meant helping a street vendor in Colombia celebrate her daughter’s quinceañera,or supporting a Cuban expatriate seeking a new life in the USA.

Lance was a true outdoorsman, a hunter, fisher, and camper. On an autumn evening, he could be found looking down cutlines, perched in a tree stand with a bow and arrow, or paddling a canoe.

Lance never stopped learning. He trained as an Emergency Medical Responder and an English as a Second Language teacher. After retiring he tried his hand in the oil patch for a year and a half: it was tough work physically, and certainly challenging for a safety conscious environmentalist. He was an avid reader and spent many happy hours perusing the latest articles from the Globe and Mail from his favorite living room chair, always well-armed for lively discussions about current events.

Lance’s aversion to Northern Alberta winters and his passion for travel led him to several months-long expeditions around the world to Africa, South America, Europe, and Southeast Asia. He documented his adventures with tens of thousands of photos. His favourite landing place, however, was in the company of family and friends, solving the world’s problems over coffee or a beer around a campfire with Alan and Drew and the boys.

Lance had a real gift for storytelling. He would captivate with his tales, always with a twinkle in his eye. He loved spending time with children and never wasted a ‘teachable moment’. That radiant smile, sense of humour, and hearty laugh will be with us forever.

Quality was important to him. “If you buy for quality, you buy once,” he would say. He took pride in maintaining his tools, engines, computers, home, and relationships. He savored imported coffees and whiskeys and crafted his own wine, his signature label, Château de Garage. As Grandpa, he dutifully instilled in his grandkids his love of chocolate ice cream.

A special thanks to the wonderful staff at the Grande Prairie Cancer Centre, Palliative Care team, and QEII 5 North for their professionalism, compassion and kindness throughout Lance’s prostate cancer journey.

A Celebration of Life service will be held at Beaverlodge United Church on Saturday, December 18, 2021, at 1:00 pm. Since capacity is limited to 50 registered guests, the service will also be live streamed through Bear Creek Funeral Service.