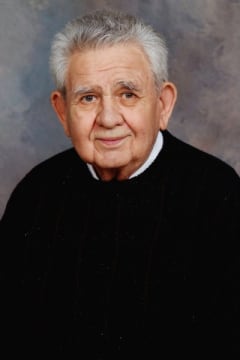 It is with heavy hearts that we announce the passing of Larry Plishka, who had been a Grande Prairie resident for 53 years. He died on May 9, 2020, at the age of 80.

Larry was born July 4, 1939 in Vegreville, Alberta and grew up on the family farm just outside of Holden, Alberta. At the age of 19 Larry met Gladys, the love of his life at a country wedding dance in Polska, Alberta. Gladys and Larry were married June 6, 1959 and were lucky enough to celebrate their 60th wedding anniversary last June. They started married life in Edmonton, but then moved to Grande Prairie in 1967 where they worked and raised their family.

Larry was an involved community member. He belonged to the Elks and ACT/UCT clubs and was always willing to volunteer in various community events. Sports were a very important part of Larry’s life, he was a curler, men’s fastball umpire, golfer, fisherman and hunter. Larry especially loved to watch Stampede Wrestling with his mother-in-law Anne Malick. He was an avid fan and spectator at his grandchildren and great-children’s’ events.

He was predeceased by his parents Andrew and Marie, siblings Mike, Teresa, Helen, Lefty, and Steve. As well as his only son Brent, son-in-law Greg Lancaster and grandson Andrew Plishka.

Due to the Covid 19 restrictions, a private Liturgy and Celebration of Larry’s life is being held on Sunday, May 17th at St. Joseph Catholic Church with Father Remi officiating.

Donations in Larry’s memory may be given to the Alberta Diabetes Foundations (www.canadahelps.org) or the Alberta Heart and Stroke Foundation (www.heartandstroke.ca).

My deepest condolences to you Gladys, and your family.
- Evelyn and Joe
Gladys, please know we are thinking of you and your family during this time and send our deepest condolences to you all! Terrie and Gary Mitchell's
- na
So sorry to hear of Larry's passing Gladys. You are in my thoughts and prayers. Lesley (Hunter) Krpan
- Lesley Krpan
Our Family passes our condolences and sympathies to you Gladys and your family. Larry will be missed by all. The Klammer Family
- Bernie Klammer
Dear Gladys and family: I would like to express my condolences on the passing of Larry. He was a very lovely man and I enjoyed getting to know him a bit after his stroke. God bless you all. Helen MacDonald
- Helen MacDonald
My deepest condolences to Gladys and the Plishka family, I had the pleasure of knowing and admiring Larry for loyal family man that he was . RIP Larry .
- Chuck Keown
My thoughts and prayers are with you Gladys. Peace be with you
- Pat Larter