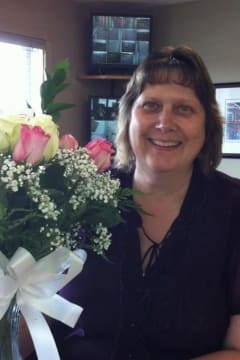 With heavy hearts we announce the untimely passing of Leona Jean Sorgaard on January 20 at the Grande Prairie Regional Hospital at the age of 59 surrounded by family.

She was born in Neepawa Manitoba on March 2, 1963 was the eldest of four girls to Neil and Jean Thiessen. She grew up in Manitoba until age of 13 when the family moved to Wembley, Alberta. Where she attended Wembley school and then went on to Beaverlodge high school where many friendships were made. She worked for Zellers during her high school years, then went on to work for a while before attending Fairview College for a parts ticket. From there she worked for Prairie Truck and Trailer. After that she went to West Country Products where she met her future husband. She got married May 25 in 1991 to Edward Sorgaard in Grande Prairie.

Leona was known for her kindness and love of people and animals. In 2009 she started working at Maxim storage where she spent the next 14 years working and enjoying meeting a variety of people who came through their doors. She would always strike up a conversation with anyone she came across. She had crocheted many baby blankets over the years and had gifted many.

A funeral service for Leona will be held on Saturday, January 28, 2023 at Calvary Lutheran Church (101 Avenue LaGlace, Alberta) at 11am.

Where Leona had such a love for animals, memorial donations may be made in her memory to the Bandaged Paws Animal Rescue Association at bandagedpaws.org and use the ATB Cares donate button (Bandaged Paws receives 100% of the donation and ATB will match 15% of every dollar donated). You may also send an e-transfer to admin@bandagedpaws.org. Memorial donations may also be made to the Calvary Lutheran Church at PO Box 204 LaGlace, Alberta T0H 2J0.