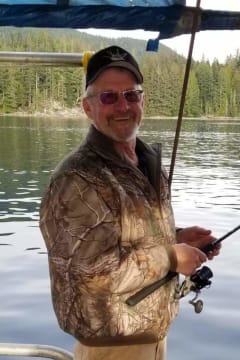 Leonard (Dutch) Allen Molendyk passed away in Killarney, Ireland suddenly while on his dream vacation touring Ireland and Scotland with his wife, Brenda.

Dutch was born on August 18, 1957 in McBride, British Columbia, to Tony and Thelma Molendyk, and spent his childhood growing up in Dunster, BC. Dutch was one of four siblings, whom he loved and always had in his heart.

Dutch met the love of his life at the bar, which came as a surprise to no one. Brenda Faulkner was, at the time, a local bartender. She must have looked pretty good pouring those drinks, as Dutch ended up taking her hand in marriage within a year of meeting. Dutch and Brenda were married in 1982, beginning their lifetime of adventure.

Together, they had two children: Laine and Marnie, who gave them five grandchildren: Mya, Cannon, Adelynn, Wyatt, and Aiden. As anyone could tell you, Dutch loved kids and his grandchildren meant the world to their Opa. In recent years, Dutch and Brenda moved to the Grande Prairie, AB area, so they could be closer to the kids, with him even developing quite the hobby farm with the focus of entertaining the grandkids in mind.

Dutch was a very compassionate, thoughtful, and generous man. He was dedicated to his family, caring for them in every way he could and making sure they knew they were loved. He was also very active and respected within his community; always working to improve the lives of people around him. This was especially true with the local grocery store, which he and his family owned and operated for 6 years. Throughout his diverse career, Dutch also worked in the logging industry, where he was a manager at the mill, and as an equipment operator with Dutchman Holdings. He also farmed over 600 acres of land and cleared 40 of them by himself. Dutch would always go out of his way to help anyone in need – whether it was lending a helping hand on a project, sitting down for a chat, giving some sage advice, or just having a good laugh.

He was pre-deceased by his father Tony Molendyk.

We love you, and we will all see you again one day.

Above all else, Dutch loved to see people come together, helping each other, and laughing together, so join us in sharing some memories and saying goodbye to one of the greatest men this community has ever known. If you leave his celebration of life with a smile and some good stories, nothing would have made him happier. Please join us at the McBride Community Hall on Saturday, June 18th, 2022, at 1pm, with a luncheon to follow. As Dutch was a proud member of the local Elk’s Hall, we would also like to invite those who wish, to join us at the McBride Elk’s Hall at 4 pm, where stories of Dutch can continue to be shared with some of his favourite libations.

In lieu of flowers, we ask that donations instead be made to the Elk’s Hall, in Dutch’s memory.