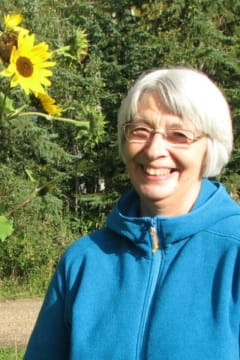 It is with sadness that we announce the passing of (Phyllis) Lynne Thompson on November 22, 2022. Lynne was a genuinely kind soul that touched the lives of so many along her journey.
Born May 6, 1944 in Edmonton AB, she was raised by her mother, Naomi LeVine (Bryenton) & Nana Nissen along with her younger sister, Muriel. The family relocated to Grande Prairie from Grimshaw AB where she met the love of her life, Neil Thompson. Lynne & Neil married Dec 30, 1963. As newlyweds they ventured North to Norman Wells before they had had their first son Sam, July of 1969. While in the Yukon, Lynne gained certification as a teacher at an elementary school. It was here she discovered an extraordinary gift educating children.

Returning from Yukon, they moved to Jasper AB in 1972 in time to have their second son, Russ. Then, from their home in Sexsmith, AB they welcomed their baby girl, Heather April 1977. In 1979, Lynne‘s gift with children supported families in Thorsby AB where many of the day home families remained in contact for years.
In 1984, Thompson’s moved to Fort St John BC. For many years, Lynne continued making more lifelong community connections while working at ABC Day Care. She was also very involved in the community at Peace Lutheran Church; her many friendships attest to her belonging there. She was an active member of the Evangelical Women’s League, taught Sunday School and ran a Parent & Tots educational program. Lynne’s ability to connect with children was most evident in her special relationships with her grandchildren during their youth; she is greatly missed by Clayton & Chicayla and Danelle & Dalen.

In later years, after a series of mini strokes, Lynne moved into Peace Villa. Following Neil’s passing in 2018, Lynne was relocated to and was well cared for at the GP Care Centre until her final day on what would have been Neil’s 81st birthday. She leaves behind a legacy of character strength, natural beauty and unconditional love that will be missed by many.

She is survived by her children; son Sam Thompson and his children Clayton and Chicayla, son Russ Thompson (Tamara), daughter Heather Nelson (Dale) and children Danelle and Dalen, sister-in-law Iris Thompson and brother-in-law David Thompson, nieces Rita & Jodi and nephews Dwayne & Ash, as well as her cousin Cathy’s children Amy & Peter who were very dear to her heart. She cared very deeply and had a level of compassion that so many were drawn to. She also had a habit of informally adopting others; relatives were not the only ones to call or think of her as “Mom”. She was a beacon of love in this world that shone so brightly.

Lynne was predeceased by her husband, Neil, her mother Naomi Levine, father Ted (Fredrick) Bryenton, and her sister, Muriel.

Please join us for a Celebration of Life 1pm Saturday November 26, at Peace Lutheran Church (9812 108 Ave Fort St John BC).
Donations of kindness or other support are encouraged to further enable Alzheimer research.