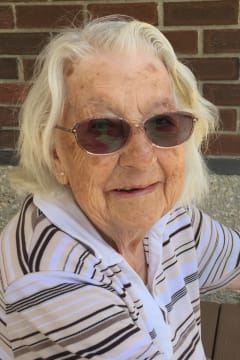 It is with heavy hearts we mournfully announce the passing of Margaret Krupa, age 93, at the Grande Prairie Regional Hospital on October 9, 2022.

Margaret was born in Gadsby, Alberta where she attended school. She married Charles Albert Hughes in 1949 and they farmed in Gadsby. She was widowed in 1959 when Charles passed from a heart attack and Margaret and her two boys, Rick and Gordon were left alone on the family farm. The boys tried to help out in some yard chores at their young ages.

In 1963 she moved with her boys, Gordon and Rick, to Grande Prairie and she married Joe Krupa. Joe was a fantastic step-dad and the best ever “Grampa”. Margaret and Joe had a holiday trailer and family camping was a highlight when Gordon and Rick were younger. Later when they had their own families they all had special camping trips together. Sunday suppers and playing cards were another special treat that we all did at the house. Then, a key part of our life passed away in 1985 when Joe, (Dad and Grampa) passed away.

Margaret loved to travel in her younger years, by bus, cruise ships or flying to warm destinations. She made several friends where she lived in Grande Prairie at 9616 111 Avenue. She loved watching hockey and chuckwagon races on tv. Later in life she became a creature of habit and routine: Wake up, bathroom, and then turn the radio on. Her notebook was by her side always where she kept track of medications and the date. She was also a dog lover (Sporty and Mickey) and she passed this love onto her grandchildren.

She was predeceased by her husbands Charlie Albert Hughes and Joe Krupa, her daughter-in-law Germaine Hughes and friend Jim.

The family would like to send a special thank you to Wild Rose Manor staff and residents, where Margaret resided from December 2020.

They also extend extreme gratitude to the Unit 12 nurses at the Grande Prairie Regional Hospital who were so caring to her and Gordon and Rick. Thank you! You are all “Angels on Earth”.

A Graveside service for family and friends of Margaret will be held on Saturday October 15 at 1: pm at the Grande Prairie Cemetery.

Rest in Peace Mom. No more pain. Another “Angel to watch over all of us” Love You!