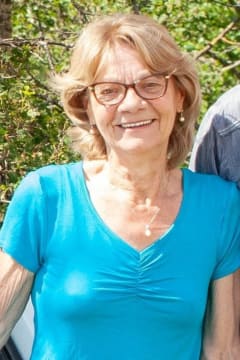 June 25, 1950 – May 16, 2021
Marian Diana Beck passed peacefully at the age of 70 on May 16, 2021 in the QEII Hospital with family by her side, after a brief battle with cancer.
Diana was born on the family farm in Craigend, AB, on June 25, 1950 the 3rd of 11 children to Walter and Mary Prochinsky. Her family moved north to Keg River in 1963, she then went on to High school in Grouard and completed by graduating in Manning, AB. After school, Diana moved to Edmonton to train to be a key punch operator. This is where she met Allan in 1969, they were married on August 7th of 1970. Soon after their son Corey was born in 1971 followed by daughter Dayna in 1974.
They moved to Keg River 1978 when they purchased a homestead. Diana was active in the School board, community league and was a massage therapist. In the early 80s, she started doing books for various businesses including her brothers. This was the start of a long career in bookkeeping.
Diana & Allan enjoyed raising their family on the farm. Diana enjoyed gardening, grain farming and working with the many animals they acquired over the years. Many hours were spent on the combine in the wee hours of the morning racing the winter storms to get the harvest off.
In 1997 the grandkids started to arrive, and “Baba Beck” was born, by 2002 the family was complete with all her 5 grandchildren.
In 2000 Diana & Allan purchased Street & Strip Performance Centre. While Allan moved to Grande Prairie to run the business, Diana remained on the farm until 2002 at which time she moved to Grande Prairie as well. Street & Strip introduced them the NPBRA family, which became a big part of her life as she spent years, as the treasurer and many people would recognize her from the registration booth at the events.
Diana was a dedicated contractor/employee for many local businesses and worked tirelessly right up to her illness. Although she did not take much time away from work, when she did, she enjoyed her time with family and friends.
Diana is survived by her husband of 50 years Allan Beck, son Corey (Lorrie) Beck and their children Trace, Kenidee and Erika, daughter Dayna (Roger) Ouellette and their children Emily and Paiton, her mom Mary (Baba) Prochinsky, brothers Roger, John, Wallace and Eugene, sisters Helena, Grace, Elaine, Viola, Faye, and Joannie and all their families. She also leaves a large extended family and countless friends.
Diana is predeceased by her father Walter Prochinsky, mother and father-in-law Nora and Raymond Beck, and brother-in-law Geordie Mosure.
The family would like to express their sincere gratitude and appreciation to staff at QEII 5 North for the genuine care and compassion they have shown over the last few weeks.
Memorial donations can be made to Canadian Cancer Society, 200 325 Manning Rd NE, Calgary AB T2E 2P5, www.cancer.ca
or Grande Prairie Palliative Care Society, 204, 10134 97 Avenue Grande Prairie AB T8V 7X6.
Care entrusted to Bear Creek Funeral Home 780 830 7742 www.bearcreekfuneral.com