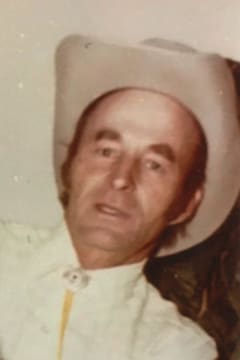 “A cowboy never says goodbye, it’s not in his nature.” Matt Milkovich was born on June 11, 1929 to Croatian immigrants Ivan Milkovich and Manda Pavelić on the family homestead in Rycroft, AB. He passed away on December 23, 2021 at the age of 92 at the Grande Prairie Regional Hospital with those special to him by his side. Matt was best known for ranching, reading and love of family.

Matt began farming with his brothers at an early age and took a keen interest in horses and ranching. He homesteaded a half section of land in Birch Hills County in 1955, breaking the land with a Minneapolis Moline U tractor, and slowly and carefully expanded his farming operation afterwards. Around this time, Matt also worked as a cat operator, worked on road construction and loaded rail cars. He was known for his exceptional animal husbandry skills, breeding, raising, and tending to the whole spectrum of livestock including horses, cattle, swine, sheep, goats, turkeys, ducks, and a variety of chickens. Local kindergarten kids made the annual trip to his farm to see the vast array of animals and birds that few in the region could match. And the kids were always provided with treats at the end of their visit.

With farming and ranching always a priority, Matt did manage to make a few trips to Las Vegas, BC and around Alberta.

After his debilitating farm accident in 2006, Matt’s life took him from his beloved farm and ranching and had him focus on other interests and perspectives in life. He had more time for visiting friends and family from near and far. Not only did he listen to their stories and experiences but he had a genuine interest in what they had to say and asked many questions engaging in lively and heartfelt conversations.

He continued to be an avid reader, reading many books from the library (especially westerns) and books brought to him by friends and family. Later, he adapted to online technology watching movies and documentaries on topics and themes he was interested in.

Matt was particularly proud of his children, Shane and Crystal, and grandchildren and after the birth of his third grandchild, Rhett, in 2020, stated “now, I have something to live for”.

He was close to and fond of his 10 siblings and would call his sister, Katie, daily during the COVID pandemic making sure she was okay. Stories shared reflect Matt helping Katie wash floors in the old house when they were children. Always there to help others, be it friends, family or neighbours, was of utmost importance to Matt.

Always kind and generous, he would graciously provide organically-grown produce and farm-raised meat and dairy products to friends and family. And his beef and pork was some of the best to be found in the area. He was always concerned that everyone have a bit of money, coming from a generation where money was scarce for most of their lives until later in life when they could live more comfortably and share a few dollars on birthdays and holidays.

Particularly special was Matt’s caregiver, Grace, who introduced him to life in far away places and the simple pleasures in life such social media, technology and food cooked to perfection and baking to soothe the soul. And she gave him the dignity and respect that he was rightly owed. They revelled in sharing food and drink over conversation either at the dining room table at home or at birthday celebrations with family and friends.

Remember Matt for his kindness, generosity and love of family, ranching and the farm. And as Stompin Tom Connors (one of Matt’s favourite singers) would sing in “Poor Poor Farmer”:

In lieu of flowers, donations in Matt’s memory may be made to In the Woods Animal Rescue would be appreciated. Donation information and donation drop-off locations are listed at inthewoodsrescue.com.