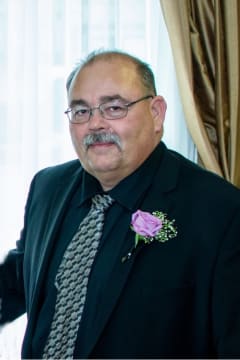 It is with heavy hearts, we announce the sudden passing of Maurice R. J. Nault, born May 7, 1959, in St. Pierre Jolys/St. Malo, Manitoba, who passed away peacefully in his sleep Saturday, May 1, 2021, at the age of 61 after a brief illness.

Maurice was the second born to a family of 7 children, he grew up alongside his sister and 5 brothers, aunts, uncles, and cousins. He lived a life full of love and laughter, and was a kind hearted loving family man, who loved being outdoors. You would always find him tinkering around in the backyard or around a fire listening to nature surrounded by loved ones, creating memories, and sharing stories, He cherished the many friendships and relationships he had throughout his life. Maurice was always putting others before himself and saw only the good in everyone, he would never hesitate to help someone in need.

Maurice started his career in Manitoba at an early age working various jobs driving truck. In 1998 he was working at St Boniface Hospital as a paramedic/HCA, where he met his wife, Lori. Soon after meeting, they moved to Grande Prairie Alberta where Maurice pursued a career in the oil and gas industry, working at BJ/Baker Hughes Services for 15 years, and most recently Calfrac, where he was employed at the time of his passing. Maurice was very grateful for the knowledge, skills, and opportunities he was given in his many roles within the oil and gas industry.

Maurice came from a very large family and had a lot of close friends, He will be lovingly remembered and sadly missed by his sweetie Lori (wife) of the past 20 years, his sons Christopher and Matthew (from a previous relationship), step children Melissa (Mark), Leanne, Tyler (Ami); Papa’s sunshine’s (grandchildren) Khylla, Caeden, Kaedyn, Kyson, Brayden, Daylan, and Rorie, great-grandchildren Matayah and Embrey; His sister Lise, brothers Dennis, Robert, Jean, Allen, Gil (Tammy), brother in-law Larry (Diane), and sister in-law Tracey (Lino); Niece Farrah (Chris) and nephew Jeremy, as well as numerous aunts, uncles, cousins, and their families He will also be dearly missed by his lifelong friends Brian and Ron Lahyer, Daniel and Kerrie Wichert.

If friends and family so desire, in lieu of flowers, gifts or donations in memory of Maurice Nault may be made to the Heart and Stroke foundation as this was a foundation he supported.

The family wishes to express their sincere appreciation to the staff at Calfrac Well Services for their support and generosity at this time.

It is hard to express the void in my heart with the loss of my best an closest friend and adopted brother to our family . Mo And I go back for decades of hunting and fishing with his brothers and friends . Maurice was a brother to me and will never be forgotten and so deeply missed to our family. We will miss all the family cookouts witch we all in joyed doing together. The layher family gives our deepest sympathy and condolences to the loss of our friend and brother Maurice Nault . I wish that all heavy hearts be lifted and remember Mo as the great friend and brother he was . Brian and Ron Layher.
- Brian Layher
Maurice was bigger then life itself. He will live on in many hearts as well as mine. Hugs to everyone morning his passing. Much love and sympathy to Lori his children and brothers and sisters..💕🙏💕
- Jeanette Fillion
Goodbye friend. Will remember fondly all the get togethers, campfires, and floats down the Wapity. It was a pleasure knowing you. Doug and Debbie.
- Doug Ball, Debbie Prodaniuk