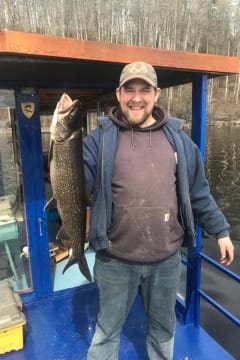 It is with heavy hearts the family of Michael (Mike) Kenneth Petteplace announce his unexpected passing at the age of 40 years on August 26, 2022 in Nanaimo, BC.

Mike was born March 27, 1982 in Smithers, BC to Ken and Debby Petteplace. He was the first born and was joined in 1985 by his brother, Lindsey. Mike was raised in various communities throughout BC. He loved spending time in the Alberta Peace Country with his Grandma and Grandpa Lindsey, his aunties, cousins and also helping put bikes etc., together at the Home Hardware store in Valleyview for his aunt and uncle. Mike’s last permanent residence was the town of Burns Lake, BC.

He spent a lot of his time at his little cabin he built at Johnson Bay on Babine Lake . There he was able to pursue one of his passions, fishing. He was happiest when he was out on Babine Lake in his little ole houseboat with his dog Bob, who was his constant companion.

Mike will be remembered for his sense of humour, smiles, big belly laughs and love of the outdoors. He was a very talented and creative woodworker. In addition to his cabin that he built he has left us with many beautiful pieces of his woodwork. Mike was a consummate foodie, a gene he inherited I’m sure from his mother and her sisters. He loved cooking and eating, he especially loved eating a good cut of meat.

Mike will be missed and lovingly remembered by his parents, Ken and Debby, brother Lindsey and Toni Petteplace, his Aunties and Uncles; Pat Pickering, Deb and Ray Petteplace, Mary Ellen and Alistair MacGregor, Anne Hubar, Jean and Charles Carter, Connie and Ernie Clough, Janet and Darren Platzer, along with his cousins and friends.

Mike was predeceased by his grandparents; Al and Jane Petteplace, Hugh and Una Lindsey, his Uncle Alvin and cousin Kevin

A Celebration of Life and luncheon in memory of Mike will be held on Saturday, September 10, 2022 at 1:00 pm at the Trinity Lutheran Church 10407 – 100 Street, Grande Prairie, Alberta in the meeting room.

Mike’s ashes will be interred with his Grandma and Grandpa Lindsey at the Goodwin Cemetery, Goodwin, Alberta in a private family ceremony

As Mike has a special place in his heart for animals, especially dogs. If you wish to honour him donations in his memory can be made to Bandaged Paws Animal Rescue Association. Information can be found on their website at www.bandagedpaws.org/donate or to a charity of your choice