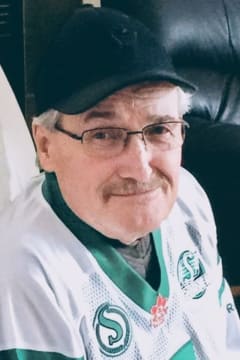 Orest Charko, a cherished husband and grandfather passed away on Sunday, November 28, 2021, after a long struggle with cancer and COPD at the QEII Hospital in Grande Prairie, AB, at the age of 74 years.

Orest was the third oldest of 6 kids, and grew up on a farm near Redberry Lake, SK, graduating high school in Borden, SK. He was a natural athlete, a hard worker and had a firm sense of right and wrong. His brother-in-law Clarence helped him start his trade in plumbing/gas fitting that took him and his family to live in various places across western Canada, such as Vernon, BC, Hinton, AB, Jasper, AB, McLennan, AB, Lloydminster, AB, and finally Grande Prairie. He finished his working career as a 3rd class power (steam) engineer at Weyerhaeuser Canada in 2008.

When not working, Orest enjoyed boating, fishing, camping, curling and coaching minor hockey. Later in life, he took pleasure in gardening, friendships and travelling, but his favourite place to be was spending time at his lake lot at Cozy Cove on Sturgeon Lake. As an avid sports fan, he was fiercely loyal to the Saskatchewan Roughriders to the point of buying ownership shares, and a staunch Edmonton Oilers supporter. He was always cheering and watching his grandkid’s hockey activities till the end. Like a fine wine, Orest improved with age and passed away with much dignity and humbleness. He will be terribly missed. May your soul be at rest, Orest you are free of pain now, until we meet again.

His wishes were to be cremated with his ashes to be spread at his favorite spot.

A Celebration of Life will be held on July 10, 2022 at 11 a.m. at Bear Creek Funeral Home.
For those unable to attend, it will be livestreamed.