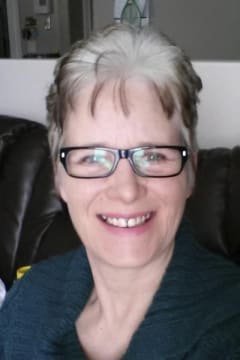 Peggy was born in Beaverlodge, Alberta, a daughter to Nora and Robert Kopp, sister to Barbara, Maxine, Brian, Warren and Collen, and grew up in and around Wembley, Alberta, Canada, going to school in Wembley and Beaverlodge and helping out on the family farm.

When Peggy was 20 years old, she met her first husband, who was from England, so she moved to England and was married and had two beautiful daughters, Jody and Dawn who are married and have families of their own.
Her first marriage ended in 1987 and when she had vehicle trouble, her best friend, Jenny, took her to get help from Melvyn Cherry. Sometime after that Peggy worked in the garage/workshop answering the phone and doing bookwork and she and Mel married in April 1990. They would have been married 30 years come April 2020.
Peggy was diagnosed with stage 4 pancreatic cancer in March 2019 and suffered and fought pain for 8 months before passing away in Beaverlodge Hospital on November 23rd, 2019.

Peggy was predeceased by her father, Robert Kopp, and will be missed by her husband Melvyn and her mom Nora Kopp, her 5 brothers and sisters, her 2 daughters and step-daughter and step-son and all of her grandchildren.

To all of Peggys loved ones, I am so sorry for your loss. I lost track of Peggy after she left for England but have often wondered how she was doing ever since then. It was a terrible shock to hear of her passing so close to our old childhood homes. It would have been nice to talk to her again. Peggy was a special person who was taken way too soon. Phil Hennig
- na
Mel, I was so sorry to hear of Peggy's passing. Peggy was always such a caring wonderful person. She always had a smile and time for a chat. She will be missed. Hold tight to the memories and remember the love you tow shared. Carla Eckstrom
- na