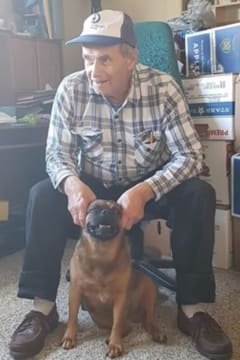 It is with heavy hearts that we announce the passing of Robert (Bob) Hujdic, (74), of Huallen, Alberta. Bob passed away on his 74th Birthday June 16, 2021 due to Esophageal Cancer.

Dad grew up in the Lloydminster area where he was employed at Bob Jack’s Sheet Metal for many years. After moving to the Wembley area in 1980’s, he welcomed two Children. He worked on the rigs and roofing, eventually working as a farm hand, sticking with this into his retirement. Dad spent much of his mid life with his Siblings, especially his sister Mary. In his later life he enjoyed spending time with his Son, Rob, and his Friends. A passion for Cars made him a recognizable figure as he did his rounds, Beaverlodge and area in his old 1983 Crown Victoria with its unique and memorable (self-done) paint job. His little dog, Digger, was his constant companion until the end, accompanying him and Rob on many trips throughout Alberta and British Columbia. Dad will be remembered as an easy-going, funny man who loved Animals and Old Cars.

Dad was predeceased by his parents, Andrew and Gertrude Hujdic, as well as his sister Mary.

He is survived by his brothers Henry and Arnie Hujdic, his children Tanis and Rob Hujdic, and his grandson Jamie Elieff.

A graveside service and interment of ashes will be held on Saturday July 17, 2021 at the Beaverlodge Cemetery.